Thailand: Children threatened by snakes and crocodiles in flood waters

Children caught up in Thailand floods are at risk of disease and animal attack as reports increase of snakes and crocodiles lurking in filthy floodwater that is now threatening Bangkok.

Thailand is facing its worst flood crisis in half a century, with standing water covering much of the north of the country, and an estimated 800,000 children directly affected.

The floodwater is now reaching parts of the capital, where many people displaced from their homes had gone to seek refuge from the floods. 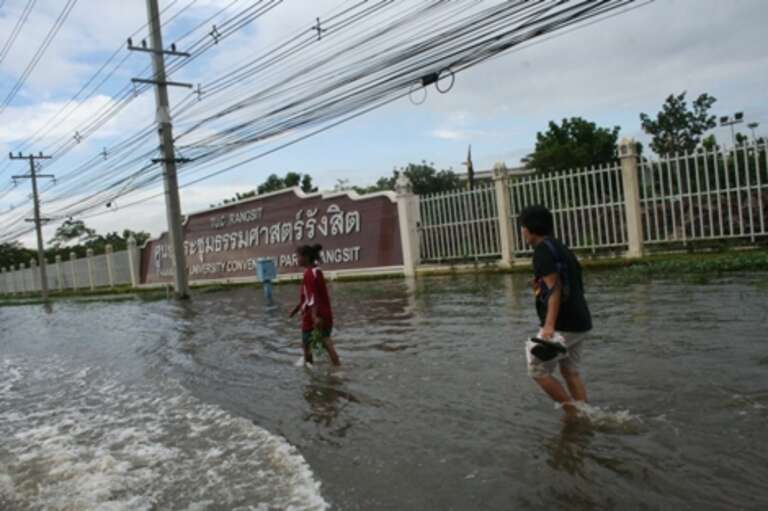 “We are hearing disturbing reports of dangerous animals such as snakes and crocodiles appearing in the floodwaters, and every day we see children playing in the water, bathing or wading through it trying to make their way to dry ground,” said Annie Bodmer-Roy, Save the Children’s spokesperson in Thailand.

Many of the families displaced by the floods have been left without access to running water or clean toilets and there are fears that water-borne diseases could spread as families are left without these basic services.

“The water is filthy, and there is a very real risk of water-born or communicable diseases such as diarrhoea and skin infections taking hold if families can’t maintain basic standards of hygiene,” she said.

“It is essential that the risks facing children in this crisis are understood and steps taken to keep them safe.”

Families have been fleeing their homes for weeks as the floodwaters spread across Ayutthaya, Patum Thani and Nonthaburi, just north of Bangkok.

On Thursday, Bangkok residents began to evacuate the city as fears grew that flooding in the capital would become even more widespread.

Save the Children has launched an emergency response to the flood crisis, and has already reached an estimated 9,000 people with aid and assistance.