Spanish World Cup winner has a goal, this time for children

In his new role as ambassador for Save the Children, the 26-year-old striker for Bilbao Athletic and part of the 2010 World Cup winning Spanish team, said “I was moved  to learn that over 8 million children under the age of five die every year globally. Of this, close to 2 million die in India alone. These are shocking statistics. What shocked me even more is that the majority of these deaths can be prevented.”

On his maiden visit to Delhi,  Fernando chose not to talk about football but the need to prevent the deaths of millions of children from ailments that are completely treatable and preventable.

“I feel that I owe a lot to football. I want to give back everything that football is giving me. I want to help the people who are fighting in their everyday lives in complicated situations.

“That’s why I decided to become the ambassador of Save the Children. I am thankful to them for the personal experience that they have given me,” added Llorente.

From his extremely busy schedule between matches, Fernando spent four days of his holiday in India visiting communities living in slums of Delhi, and saw Save the Children’s Mobile Health Van benefitting 100,000 families in the Okhla slums of South Delhi.

This was his first ever field visit and definitely an eye opener for him as the Campaign Ambassador.

“It is hard hitting, more shocking than what I ever thought or ever seen in my life. I never thought that some children could live and grow up healthy in such conditions. At the same time I am amazed to see people smiling and happy despite their problems. People here are extremely warm and welcomed me in their homes,” Llorente said.

It was heartening to see the enthusiasm and warmth with which the Spanish striker met the community and kids. Undaunted by the unexpected rains he walked the narrow lanes to get a glimpse of life people living in the slums have – without access to even basic facilities of health and hygiene.

He met with pupils in a school run by a Save the Children partner. Children asked him question about the game. One kid got up and asked, “Are you married?” Llorente smiled and answered “No, but I have a girlfriend in Spain where I live.”

Language seemed to be no barrier between him and the kids. Their hearts could connect.  Where they couldn’t we translated for the ease of communication.

The day ended amidst excitement and cheers when under 6 team was selected to play football with the champion. Not only the children team but the whole community gathered in the park echoed with cheers ‘Once More’.

We headed back to the hotel. 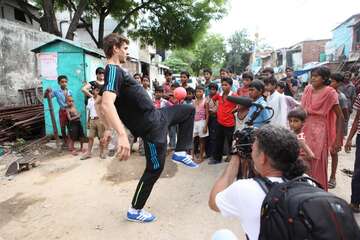 An intense day came to a close and Fernando reflected:

Apart from football there is a whole new mission on Llorente’s mind.  Llorente promised to take back the message that children everywhere have the right to live and grow healthy.

“I would like to share my experience with people back in my country, show them the reality as I have seen. There are millions of children who need help and opportunity to live. I would continue to collaborate with Save the Children to help all the children who need our attention,” said Llorente.

The next day we met the children, all of them wanted to become football player when they grow up.

I confess I too have become a huge fan of the new Campaign Ambassador and even making modest attempts understand the game.