WHO chief: Remember the people 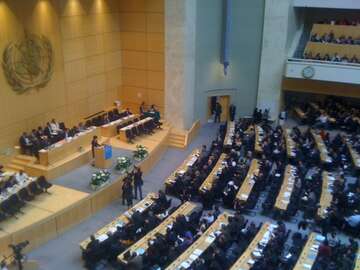 This annual meeting brings together delegations from member states to talk about major issues in health – such as health system strengthening, preparedness for an influenza pandemic, and the global immunisation and vaccine strategy. In addition, governance issues are being discussed, notably the future financing of WHO.

The right to health

Dr Chan’s words remind us to think beyond the walls of Geneva’s grand Palais des Nations. We must ensure that the lengthy discussions produce evidence-based guidance that will prompt concrete action on people’s health at the global, national and local levels.

Remembering the people also reminds us that member states are accountable to their people to deliver on health rights. The launch of the Commission on Information and Accountability for Women and Children’s Health new report  this week demonstrates this is as a very present concern.

Dr Chan praised achievements that have been made. Many of them are reflected in the debates and resolutions in the annual Assembly meetings.

She spoke of the rapid development of new technologies (such as the meningitis vaccine). She talked about the capacity of innovative finance mechanisms to drive down prices (such as the advanced market commitment, which guarantees manufacturers an early market for new products).

And she touched on the crucial role of partnerships in making all of this happen, and the fact that vaccines are being delivered to the children of developing countries at a faster rate than ever before.

She spoke of the investments made to strengthen primary healthcare, the realisation that health financing policy can make strides towards reaching universal coverage, and the importance of social determinants of health.

In order to build on these achievements, she made a plea for fully funding the budget of Global Alliance for Vaccines and Immunisation (GAVI) at the pledge meeting next month.

Dr Chan also warned of the difficult times. The environment of global health is increasingly complex, with a multiplicity of actors. The effects of climate change are being revealed with more regular and intense natural disasters. And the financial crisis will endure, with significant consequences for the extent of resources available for health.

It means we have to be more ambitious, more efficient, and more committed to overcoming inequities in healthcare. It’s a “journey of reaffirmation, remembrance, reform and revitalisation,” Dr Chan said. “Remember the people.”