One week to go and the pressure is on! 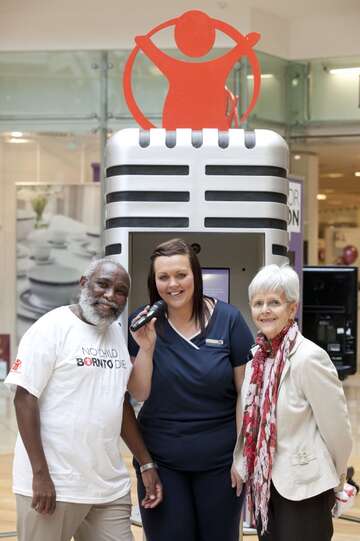 Local campaigners across the country have been throwing their weight behind our health worker campaign.

Following the success of the vaccines campaign earlier this year campaigners stopped only to catch their breath before crying: vaccines won’t inject themselves Mr Cameron – the world needs more health workers!

A taste of what’s been

In Sheffield campaigners hand wrote and delivered letters to their MP, Nick Clegg, asking him to speak to the Prime Minister about his plans for tackling the global health worker shortage ahead of the crucial UN meeting on 20 September.

In Birmingham, Manchester and Southampton campaigners gathered in shopping centres to literally add their voices to the campaign and inspire others in their community to show their support.

Campaigners have been on the radio they’ve been in the newspapers and they’ve even been in the Prime Minister’s office.

Last Wednesday a group of inspiring local campaigners from Carterton and Witney, Oxfordshire went to meet their MP, David Cameron.

They handed him a giant prescription with the words NO CHILD BORN TO DIE printed on it and urged the Prime Minister to prescribe more health workers in poor countries. 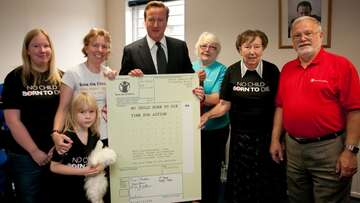 doctor or nurse or because their mothers have to give birth alone.

“This isn’t about finding more money to spend on aid – it’s about investing the money already set aside on the things that have the greatest impact.

“ World leaders urgently need to take action to deliver on their promises to reduce the number of child deaths and we were glad to have the opportunity to show David Cameron how important this issue is to people in his community.”

Time to step up

The Prime Minister said: “It was a pleasure to meet with constituents who care so passionately about saving children’s lives.

“The international community should step up and take the action needed to promote the health of children around the world.”

This is a great example of local campaigning in action!

A taste of what’s to come

Over 30,000 people have supported the campaign so far and with only one week to go before the UN General Assembly it’s vital we keep up the pressure.

On Thursday six campaigners from around the country will congregate at 10 Downing Street to present the Prime Minister with a gold disc representing all those who have added their voice to the campaign over the summer.

But there’s still time to take part – If you haven’t already done so, please sign our petition today! Or, if you’re feeling adventurous, why not go a step further and physically ADD YOUR VOICE.

Still unsure about what the health worker campaign is all about?

Dial in to our teleconference and get exclusive access to our advocacy experts this Wednesday 14 September at 7pm. We’ll be getting to the heart of the issues faced by the world’s poorest countries. Register today.

This is the time for action. It really is.