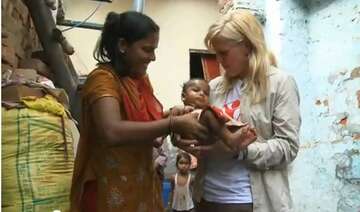 Ashley Jensen, best known for her roles in the television series Extras, for which she was nominated for an Emmy, and ABC’s Ugly Betty, was in India for a week to see our work first hand in her new role as an ambassador for us.

When she learned about her visit to India, Jensen was thrilled but wee bit anxious as well.

“It was a mixed bag of emotions. I had never been here, so was very excited to come here but also anxious to be facing the situation that was so different from the world I come from.”

Probably Ashley’s visit to India was just meant to be.

“Save the Children contacted my manager for a voice over for their film series. I agreed.”

Ashley lent her voice to a six-year-old Chotti’s story of living in the slums and rag picking for a living.

“That little child’s story stabbed me in the gut. Her struggle, her living conditions yet smiling. No child deserves the hardships that Chotti goes through every day of the year,” Ashley said.

Ashley, who has recently become a mum, says her life isn’t the same now. Her life revolves around her three-year-old, Francis.

“Motherhood has given me new eyes, I view everything through my son’s. Everything I do, I want to do it for my son. Suddenly I feel I’m calmer with greater patience, not just in bringing up my boy but towards life itself. I am a changed person definitely.

“I would say that motherhood is an instinct you naturally feel.”

Ashley was overwhelmed with what she saw, a contrast to everything she’s been exposed to before.

“Nothing quite prepares you for the sights, sounds, smells and conditions of the Sanjay Colony slum in Delhi. It will stay with me forever.

“I met Bano, who had lost her newborn baby just because she didn’t have a trained midwife to help her with her birth.  This is so wrong but it’s happening now and it will be tomorrow. As a mum, I know that you want to do everything for your children and every mum wants that whether they are in Beverly Hills or in the slums in Delhi.

“It’s gut wrenching to imagine that Bano had no choice but to pick up her life and get on with it when the baby could be saved with right help at the right time.”

It is not easy being a mother here. Life is a daily struggle, with most living in extreme poverty in the slums. So many children die here of illnesses that can be easily prevented.

Health workers by the side of every mother and every child

“While the whole experience is exhilarating and terrifying at the same time, I am grateful indeed, more so now, that I had with me doctors and nurses who knew what to do.”

In the slums Ashley met Rekha, a health worker who provides vital support and care and educates pregnant women and mothers in the slums who otherwise don’t have access to the most basic of healthcare and information.

There just aren’t enough of them.

“Without health workers like Rekha and the amazing work they do, many children won’t make through their most vulnerable first few years.”

Ashley has joined Save the Children, along with other celebrity mothers in India and across the world, in calling upon the governments to quickly fix the gap in the number of health workers.