Across 38 locations in the UK, Madrid, Frankfurt, Dubai, Berlin, Hong Kong, the Netherlands, Uruguay, Jersey and the Isle of Man, 400 Lloyds Banking Group employees aimed to raise more than £100,000 for Save the Children by cycling 18,297 miles on static bikes.

That’s the equivalent of once around the earth on land.

I came up with the idea to complete in the event back in May and to see the event in reality this week was incredible.

Over 400 people came together from all corners of the earth, at the very same time, for 24 hours — all for a common goal and a common cause.

The event started at the London Eye at 10am. What an incredible location to be the focal point for the entire challenge! 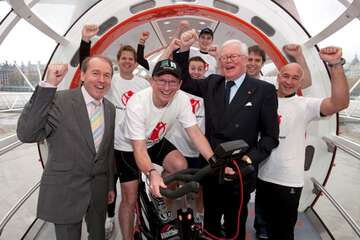 With each hour that passed, the distances coming in from all teams was hitting an average of 1000 miles — an immense distance, much greater than I expected.

I am blown away by the effort shown by the 400 people taking part.

This was a mammoth task for so many of the people taking part, fighting tiredness, as well as exerting themselves to cover the miles.

For many they will not have cycled in a long time, but will have covered anywhere up to 100 miles in 24 hours.

With our funds heading towards our £100,000 target, the event really has delivered…with a huge appetite for a repeat next year!