Liberia elections: there’s so much work still to do

Today is election day in Liberia and Save the Children’s compound in Saclepea, Nimba County, is eerily quiet. The national staff have returned to their homes to cast their votes.

The results of the election won’t be announced for a couple of weeks, but we’re hopeful of a peaceful outcome. Meanwhile, without the hubbub and constant activity characteristic of the emergency programme here, I’m trying to catch up on a mountain of reports. But I find myself reflecting on the fact that it was another election almost a year ago that brought me to Liberia in the first place.

The post-election crisis in Ivory Coast saw huge numbers of Ivorians fleeing their homes and crossing the border into neighbouring Liberia. When we launched our emergency response here in January, around 32,000 Ivorian refugees had already been registered, mostly in Nimba County. Today, there are more than 170,000 refugees in Liberia. Around 60% of them are under the age of 18.

Save the Children is working in three camps and 25 host communities in the two counties most affected by the emergency – Nimba and Grand Gedeh.  Our child protection and education programmes help both Ivorian and Liberian children, as the crisis has affected everyone.

Welcoming with empty but open arms

Although a number of camps have been established across the region, the vast majority of refugees continue to reside within Liberian communities near the border. When I visit the field and speak to the people I meet, it never ceases to amaze me how communities whose own resources are already scarce have welcomed refugees, often literally, into their own homes.

Whenever I remark on this, I’m told simply that many Liberians were themselves refugees either in Guinea or Ivory Coast during Liberia’s own conflict, which ended with the exile of the notorious Liberian ex-President Charles Taylor in 2003. I wonder if I would be so generous on the basis of a shared experience. 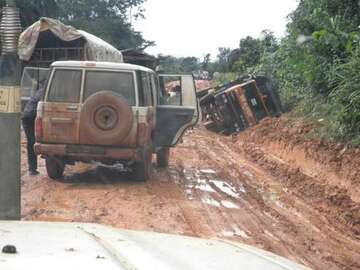 Working along the border in Liberia is a challenge because of the scale of need, but also because of the daily probelms caused by the effects of a long rainy season on impassable dirt roads to isolated communities.

An even greater challenge we face is that, in a year that’s seen a devastating tsunami in Japan, conflict in Libya and a food crisis in east Africa on a scale that’s almost impossible to comprehend, the situation in Ivory Coast and neighbouring Liberia has been overshadowed and, dare I say it, forgotten. And while the world’s interest in the crisis here disappeared, the problems certainly did not.

Helping children, whether the world watches or not

So, when I look at how much progress we’ve made in the past 10 months, how the programme has grown, and how many children have benefited from Save the Children’s work, I feel a sense of achievement. But I also know that there is more work to be done, that many of the refugees here won’t be going home any time soon, that children will continue to need our support.

As the eyes of the world turn, briefly, back to Liberia – to an election in an unstable region, to an incumbent president who has just been awarded a Nobel Peace Prize – I hope they also see the continued plight of the refugees and their generous hosts.