This week my colleagues from around the world have been participating in Global Handwashing Day.

The aims of this annual event simple: to promote a global culture of washing your hands with soap; to spotlight what’s happening around the world and raise awareness of the benefits of keeping hands clean. 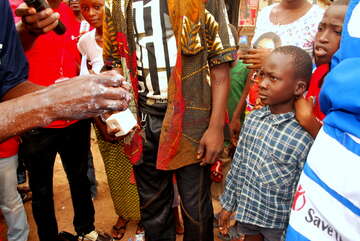 When I sent round a note to encourage our country offices to participate in Global Handwashing Day the first response came from Ivory Coast.

“We’re going for it” said Chris Davies, adding, cryptically “could you recommend a fancy dress manufacturer?”

I had to decline, wishing him luck, and feeling a bit left out of the party!

So it was that at a temporary site for people forced from their homes in Guiglo, 150 children sang, “we wash our hands before eating and after the toilet, we wash our hands with water and soap”.

As they sang they rubbed their hands with enthusiasm which proved they’d taken to heart tthe message given by the human-puppets Mr Hand, Mr Water and Mr Soap.

The characters had previously led Save the Children’s caravan that gave hand-washing demonstrations at the town’s small restaurants. 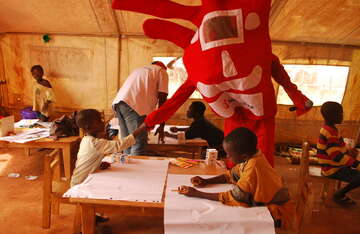 As the campaign caravan travelled across Guiglo, café owners were given a bucket with clean water and soap, after having taken part in hand-washing demonstrations by Save the Children’s teams.

‘’We really appreciate Save the Children’s gifts. I had heard about the hand-washing on the radio”, said Mr Eric Djin, manager of restaurant ‘le Bilan’, as the caravan moved away.

“The hygiene kit we received was really needed as we did not have a place where people could wash their hands before. In the kit was soap, a bucket, a poster and a leaflet showing how to wash hands”, he added with a grin.

At areas where we’d created safe environments for kids to play in, children created posters with the key hand washing messages for their own awareness-raising campaign in the camp. The best designs will be used to create a calendar for the children.

And on the other side of the continent

An official ceremony was held in the town’s main square, where other activities organized by the local council other NGOs.  With support from Unicef and the local health authority, Guiglo was made the Ivorian capital of global hand-washing day 2011.

In Ethiopia, too, the team decided, quite rightly, that the way to maximise our impact on children’s health is to make it fun. Teams in Amhara and eastern regions, worked hard to set up fun activities in schools.

The Ethiopia team tell me that videos are on their way, so maybe I will get to sample the party atmosphere, after all.