Injecting momentum into our Parliamentary campaign

In just one month’s time, governments and donors will come together in London for the Global Alliance for Vaccines and Immunisations (GAVI) conference to decide how to fund vital vaccinations programmes across the world. Save the Children took part in a joint event at Parliament last week to brief MPs and Peers on why the meeting is so important.

The event was hosted by the All Party Parliamentary Group for Global Action Against Childhood Pneumonia and chaired by Jim Dobbin MP. The speakers included Save the Children Ambassador Natasha Kaplinsky ; Helen Evans of GAVI; Simon Wright, Head of Health Policy at Save the Children; and Minister of State for International Development Alan Duncan (pictured with Natasha). 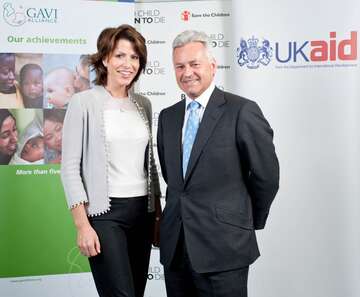 Natasha Kaplinsky spoke movingly about her recent visit to India with Save the Children, where she saw children who had, along with their parents, travelled many miles to get lifesaving vaccines at Save the Children-supported clinics. She contrasted the life chances of one little girl she met there called Desire with those of her own daughter in London. And she called on everyone present to end the scandal of millions of children dying from diseases that can be prevented with a simple, effective and inexpensive injection.

Perfect fit
The Minister, Alan Duncan, spoke very positively about both the work of GAVI and immunisation programmes. They are easily targeted, measurable and effective, making them a perfect fit with the government’s emphasis on transparent and results-focused aid.

He praised GAVI as an organisation, in its transparency and its innovative ways of working, calling it “a game changer and a life saver”, and later on referring to the decision to support GAVI as a “no brainer”. All of which bodes very well for the climax of our vaccines campaign at next month’s meeting – as does the impressive tally of 119 MPs who have now signed our Early Day Motion.

Glaring problem
But it’s not just about saying the right things. It’s about making sure they happen in a way that’s fair and effective for all of those in need. Simon Wright, our Head of Health, talked about one of the most glaring problems with global vaccines provision at the moment – its uneven and unfair spread. A rich child in Nigeria is nine and a half times more likely to receive vaccinations than the poorest.

Simon stressed that GAVI must help governments get vaccines to the poorest children. These are the very children who are most at risk from vaccine-preventable diseases, yet their plight can be easily missed if we only look at national averages for accine provision.

Vaccines don’t inject themselves
There is also a huge need to build better health systems in developing countries, staffed by well-trained and motivated health workers – doctors, nurses, midwives and others. Vaccines may be a relatively straightforward intervention but they don’t inject, or distribute, themselves. Simon also stressed that pharmaceutical companies have a role to play in helping to close the financing gap that prevents children from receiving the immunisations they need – by lowering their prices and making the treatments more affordable for the poorest countries.

So much hinges on the GAVI meeting, just four weeks away. Add your voice to our petition to help save 4 million lives in four hours.