Driving around parts of Delhi gives one of the clearest impressions that India is a big booming economy.  The expanded metro, hordes of cars in the road, busy shops and big houses all point to rising affluence.

From one of the main roads, a quick turn into Sanjay Colony gives a view of very different world.  There is no road to speak of, make-shift structures abound and a proper sanitation system is obviously absent.

Sanjay Colony and similar places are often referred to as “pockets of poverty”—deprived communities within well-off areas that have become a fixture in many cities.

Save the Children runs a mobile health clinic here.  Mothers and children can access basic health services for free.  The day I went some women were getting ante-natal check-ups, while one mother was seeking treatment for her baby sick with pneumonia.

I was told that the nearest hospital is not very far but it costs 200 rupees to get there.  That’s only £3 but in a country where 75% of the population lives on less than $2 a day, that’s still out of reach for many families here.

India has very high child and maternal mortality rates.  In 2009, about 1.7 m children died before their fifth birthday making it the country with the highest burden of under-five mortality globally.

While it is true that cases of child mortality varies from one state to the other, the harsh reality is that huge numbers of households do not have access to basic healthcare which leave children at great risk of dying from preventable causes. 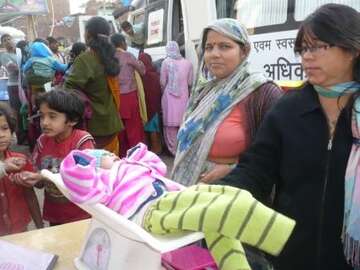 Earlier this year we wrote about healthcare deserts—a term which sometimes describe geographical area where health services are too physically remote to be reached.

In many cases however it describes a situation in which services are unaffordable, or of such poor quality that healthcare is not sought, or is sought and not available.

Urban poor communities tend to fall under this state.  Many like Sanjay Colony are within reasonable distance from a health facility but poor households are still unable to access them.

Efforts are being implemented to improve poor people’s access to healthcare.  Some have removed user at the point of use for basic health services.

Others are giving conditional cash transfers, i.e. giving cash to poor households on the condition that they let their mothers and children attend a health centre.

Many other schemes exist worldwide. What is clear however is that measures to boost household demand for healthcare should be matched with improvements in the supply side.

Removing user fees or giving cash transfers won’t significantly improve outcomes among the poorest households if the health facility is too far, health workers are absent or services are inadequate.

Non-economic barriers to accessing healthcare should also be addressed to improve health-seeking behaviour.  Otherwise, these schemes will miss the poorest and most marginalised communities which might risk deepening health inequalities between them and the rest of the population.