The activists held up more than a hundred placards which together formed a giant picture of a midwife and baby to mark the launch of Save the Children’s new report on the global health worker crisis.

Our report, No Child Out of Reach, shows 350 million children will never see a health worker during their lives.

Read No Child Out of Reach 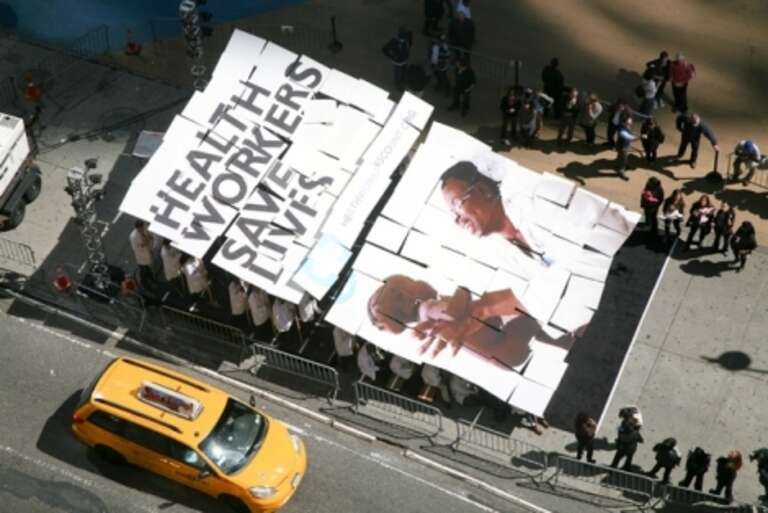 Children living in the UK will see a doctor or a nurse at least ten times in their first five years.

But in Africa and Asia millions of children die every year from easily preventable diseases such as pneumonia and diarrhoea, simply because they have no way of being seen by a trained health worker if they fall sick.

We’ve released our report as world leaders gather at the UN General Assembly in New York Tuesday. This week there will be a major push to secure funding to fill the global shortfall of 3.5 million health workers that is threatening the lives of millions of children across the world.

Children are five times more likely to die before their fifth birthday if they live in countries such as Nigeria, Ethiopia and Liberia – which fall below the World Health Organization health worker threshold (of 2.3 health workers per 1000 people) – than children living in countries with enough health workers.

Across the globe celebrities like Ashley Jensen, Christy Turlington Burns have joined over a million campaigners, putting pressure on their leaders to take action at the UN to make sure no child dies because they can’t see a nurse or doctor.

“It’s simply not acceptable for a child to die because a midwife or a nurse is out of reach,” said Brendan Cox, Director of Policy and Advocacy at Save the Children UK.

“Training health workers is simple and inexpensive, yet their impact is immense,” he added. “Hundreds of children’s lives will be saved by the vaccinations a health worker administers, or by the trained help they can give to pregnant mothers.”

“World leaders must put an end to this scandal and ensure that all children, regardless of where there are born, are able to see a health worker when they need it the most.”

Find out more about our health worker campaign