Global Action week on education so all girls can be Mafalda

This week we are taking action for girls and women by celebrating the Global Campaign on Education’s Global Action Week on Girls and Women’s Education. I’ll start the week by borrowing ideas from Mafalda.

Mafalda is five years old, with a strong character and many ideas about the world she lives in. She challenges society in every aspect of life; from fundamental human rights, to world peace, to why children should have to eat soup. Quite a girl, like so many millions!

Mafalda has always been my favourite cartoon. A childhood reference for many generations of children in Latin America and Spain, Mafalda is the cartoonist Quino’s best known character. Quino expressed his ideas about his society during Argentina’s dictatorship.  His cartoons were so popular UNICEF invited him to illustrate the Convention on the Rights of the Child with Mafalda and friends.

Mafalda starts going to school when she turns five. Her parents believe in the importance of her schooling and in allowing her to question things around her. Unfortunately, many girls face barriers that are not present in Mafalda’s life.

Almost all of these are reasons why 54% of the children who are out of school worldwide, are girls:

What is she potentially exposed to in the environment she lives in?

This week is an opportunity to remind governments and societies of the many challenges we face in making sure all girls go to school and to show that girls are key, strong spokespersons for their societies.

But it is also an opportunity to share stories of the many positive developments that are taking place everywhere to make sure girls enjoy their right to education. The number of girls who have access to an education compared to their male classmates [called gender parity] has improved a lot in regions that started the decade with the worst gender gaps.

Finally, if you feel particularly inclined to express yourself in other ways, take inspiration from Mafalda below. 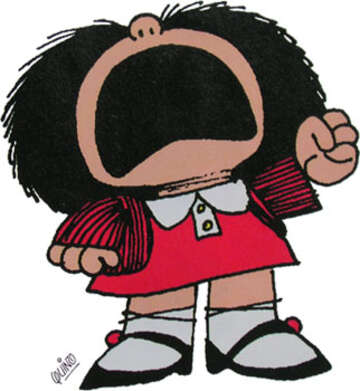