Today the government has announced that parents on low to middle incomes who work, or want to work, less than 16 hours a week, will now be able to claim help from the government with their childcare costs.

The government has found money from outside the existing childcare budget for this extension of support.

It’s thanks to your support

Thanks to Save the Children’s campaign, and the support of thousands of members of the public who contacted their MP, the government has shown that they’ve listened to the concerns of campaigners and parents about the impact of childcare costs on families up and down the country. 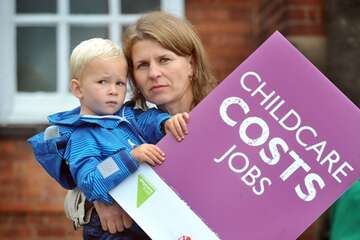 Today’s announcement is great news for the thousands of families who will benefit, and especially for the children in those families. Being able to afford childcare is so crucial for parents to be able to take up work and, for the poorest parents, to be able to work their way out of poverty.

The fight goes on

There are 1.6 million children in the UK who live in severe poverty, their parents unable to afford the basics like enough food, heating and clothing. Most of these children are in households where no adult works, and it’s the cost of childcare that’s stopping many from being better off  by working.

We recently carried out a survey of parents with Daycare Trust, which showed that a quarter of parents in severe poverty who responded had given up work because of childcare costs. And a third had been forced to turn down a job because of the high cost of childcare.

One step on a long road

Extending help with childcare costs to parents working fewer hours will mean that more parents will be able to re-enter the job market and start working their way out of poverty. Those already in work, and working less than 16 hours a week, will now be better off.

However, we believe that the government will still have to invest more to support families with their childcare costs, if it’s going to deliver on its promise to make work a genuine route out of poverty for the poorest families.

Our survey also showed that low-income parents working longer hours had been hit by a cut to support for childcare costs that the government made in April this year.

Previously, low- to middle-income parents were able to claim up to 80% of their childcare costs (up to weekly maximum limits). In April, the government reduced this to 70%.

Worryingly, 40% of parents in severe poverty who responded to our survey said that this cut meant that they were now thinking about giving up their job, putting their family at much greater risk of slipping into severe poverty.

So, while we warmly welcome today’s announcement, we’ll continue to call on the government to do more to support all low income families with their childcare costs, whether they work part time or full time. It’s the only way we’ll make sure that our children don’t grow up in poverty because of the high cost of childcare.