Why the president of Liberia should rule the world

Ellen Johnson Sirleaf, the first female President of Liberia (and indeed the first female President in Africa!), is talking at the World Health Assembly (WHA) right now. She is absolutely inspiring: reiterating that people should not have to die because they are poor, that mothers should not be faced with the impossible choice of feeding their family or saving the life of their child. She is calling again for free health services.

Yet her political commitment is struggling to reach the whole of the WHA. Today we are discussing a resolution on the Millennium Development Goals and assessing the progress that has been made so far.

We are particularly keen to see a resolution on social protection extended to include the need to remove cost recovery health systems (which often involve charging users for health services) and replace them with more equitable financing systems that pool resources at the national level. Many sub-Saharan African countries have attempted the experience of removing user fees, but many of these countries are worried today to stick their 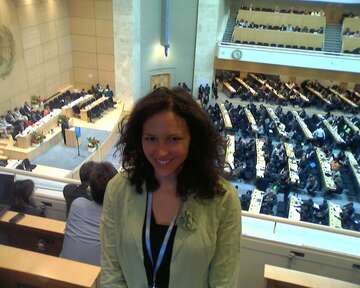 neck out, to support a clearer language because they know they might annoy a few peole. So here we are, talking, lobbying, trying to get some brave statements out there.

If only President Sirleaf’s commitment translated into a clear resolution by the WHA… If only she ruled the world…We will keep you posted.