Striking back at pneumonia

Did you know that pneumonia is the one disease that kills the greatest number of children under five throughout the world? The greater irony however is that it’s easily treatable. Pneumonia claims 1.5 million young lives every year. The figure stands at 50,000 children in Bangladesh which means 137 Bangladeshi children die every day from pneumonia! It’s a staggering sum.

In my frequent travels all over Bangladesh, I’ve met many children whose parents informed me that their child suffers from pneumonia. In multiple conversations I’ve had with them, the conclusion I drew was that awareness was the crucial key to preventing this disease.

We have planned a “Blue Balloon” experience for 12 November. We will ask people to tie 3 balloons to traffic stops and/or carry these along with them. These balloons have the words “Breastfeeding”, “Treatment” and “Vaccination” printed on them.

This activity will happen at popular spots of the capital city, Dhaka. There’s no need to worry though – we’ll definitely be tying balloons once the traffic halts (and for once I shall be wearing my glasses just to be extra careful…)

Save the Children will be setting up 5 kiosks in Dhaka’s largest and busiest shopping mall. At these stops volunteers will hand out balloons to those who stop by and ask them questions on child mortality and pneumonia. All of this is an attempt to raise awareness that pneumonia is the leading killer of children in the world.

Inspired by our initiative, The Pediatric Association of Bangladesh is setting up similar awareness stations at 19 government colleges modelled on our kiosks. For the uninitiated who may wonder “Why blue?” the answer is simple — children who are dying of pneumonia turn blue because they cannot breathe.

Earlier this year I met 4-year-old Munira in Babuganj, a remote village in Bangladesh. Her mother Moina told me that Munira was recovering from pneumonia. It was evident that Munira was getting better, judging from how active and animated she was. She ate a guava, led a chatty conversation in semi gibberish and happily bullied her doting older sister while smiling and laughing away at me and the others who were visiting. 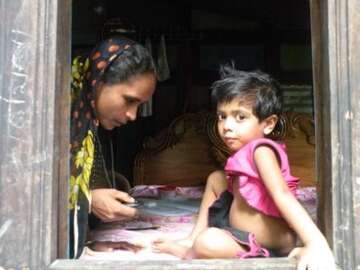 Moina credits a Community Health Volunteer named Dolufaat (trained by Save the Children) to the success behind Munira’s recovery. She informed me that Dolufaat came over to her house often to advise on what to feed Munira and on the importance of cleanliness. At monthly group meetings for mothers, Dolufaat explains some of the warning signs of pneumonia — vomiting, fainting, convulsions and the inability to eat anything.

Dolufaat, who has been Moina’s childhood friend while they grew up in the same village, looks visibly relieved when asked about how she felt now that Munira was getting well. People who are dedicated to helping others like her make all the difference in the world. It was great meeting her.

Dolufaat agrees that breastfeeding provides a natural immune boost that helps prevent pneumonia and other diseases. Breastfeeding promotion is possible in any community — no matter how impoverished or isolated.

The Government of Bangladesh seeks support to introduce vaccines to prevent the leading causes of pneumonia. In Bangladesh, only 30% of children under the age of 5 with suspected pneumonia are taken to an appropriate healthcare provider. This is what contributes to the figure of child deaths we initially started this blog with — 50,000! Isn’t that outrageous?

In the digital sphere, we’re using social media tools to spread the word across Bangladesh and in Asia we are experimenting with Twibbon. The response so far has been really encouraging. In Bangladesh currently there are more than 1800 supporters on our EVERY ONE fan page on Facebook and 187 of our fans have a  twibbon. We have also been tweeting with (hashtag) #blueballoon on twitter to spread the word. Now that you’ve read my blog – go get that twibbon and raise awareness about the devastating consequences of pneumonia.

Won’t you join us?