So the weekend of the race arrived… the race was never far from my mind. I was focusing on what I was eating, drinking, how much I was on my feet and how much sleep I was getting. Not that I was taking this half marathon seriously or anything!

All through the weekend I kept getting e-mails from JustGiving saying people had donated onto my page – I knew the total was steadily climbing!

On Saturday I went to the office to pick up all the Save the Children kit to take to Hyde Park. Ian, who also works in the events team, was also in preparing as the following day he was flying to Haiti to make a film about our work there nine months on from the devastating earthquake. He was looking forward to it but also realised what an emotional rollercoaster it would be. It was exciting to think that Ian could be seeing how the money I had raised for the Children’s Emergency Fund was being put to use in Haiti.

I didn’t sleep that well at all on Saturday night due to pre race nerves.

So I packed everything into a taxi and we set off for Hyde Park. The event village was almost fully set up, but there were lots of people ferrying around with crates of water bottles and barriers preparing for the race. I started to get really scared… We walked along the start of the race and I tried to imagine me actually running along with the other 12,500 people.

At home I went through the pre-race rituals of tying my timing chip on trainers, pinning my race number onto my Save the Children running vest and looking over the route again and again. The reality of the situation really started to hit home.

The next morning, I headed to Hyde Park. I was thrilled with the weather – fairly mild but the sun wasn’t out yet. I went and said hi to Vicky, Sharon and Lizzie in the Save the Children charity marquee area.

Then the time had come for me to go towards my starting pen. But where were Olivia, Emily and Simon who I was hoping to run with? I saw a big tomato, an elephant, Burt and Ernie but no-one I knew! Just before the starting gun went off Simon and found me in the queue and then we spotted Zinny hidden behind a giant caterpillar in time for us all to start together. So off we trotted off down South Carriage Drive… 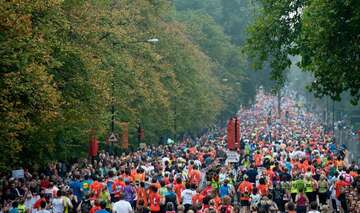 The next 13miles are now somewhat of a blur! I had looked at the route but then instantly forgot it….I knew that I had to try and stay relaxed the whole time and to try and enjoy the experience. And do you know what? I absolutely did.

My mum and little sister where there at the start, and my boyfriend was a little further along the route…and then I managed to see someone I knew practically every mile of the route as people moved from one cheering spot to the next.  Zinny and I knew that the Save the Children cheering point would be at mile 10, so we were focusing on that. A massive thank to all my friends and family who supported me – it really made such a difference.

The crowds were great – even though there was an eeerily quiet section between mile 7 and 8 when we ran diagonally through Hyde Park. I started to think we might actually do it! At no point did I want to stop, as I was just so happy to be there. I knew we were doing a good pace and I knew there would always be some more recognisable faces along the route before too long.

And so the final few miles came. I got disorientated as to which side of Hyde Park we were running along. And then the crowds started to get heavier and we ran past the Royal Albert Hall and I knew we were homeward bound. My uncle, aunt and cousins were there and started running along with me…we were almost there.

As soon as I could see the finish line we started to speed up and made Olivia’s day by saying we were very almost there! We had done it!  I can now tick ‘half marathon’ off a list of achievements. I have raised £576 for the Children’s Emergency Fund which I know will make a real difference to the lives of vulnerable children caught up in emergency situations each year. What a fantastic weekend! 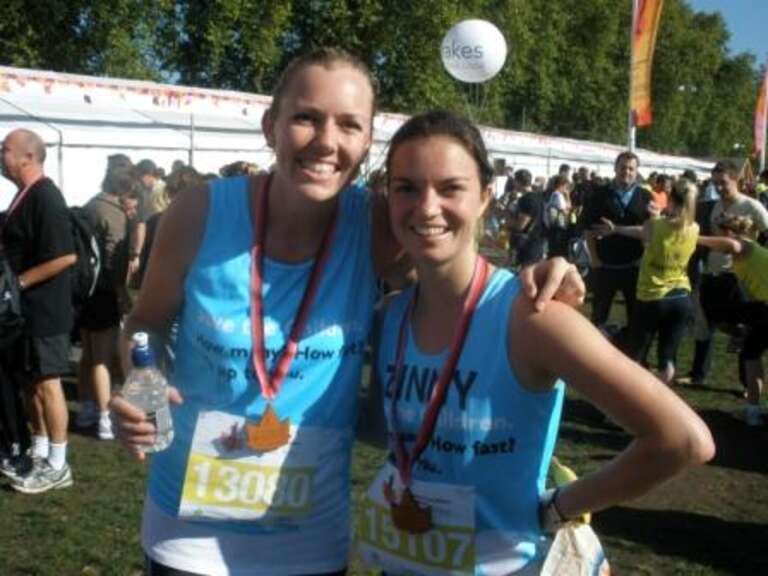