In the UK, it rains heavily and it’s annoying. Trousers soak up puddles and freeze your ankles, umbrellas attack your eyeballs, amusing drivers soak you at the bus stop, offices smell of damp.

In Niger, it rains heavily and –  if you’re poor, and you probably are – it’s economic breakdown. The price of your house crashes (as your house collapses). Your savings account is wiped out (as your livestock drown). You lost your job last October (when the last harvest failed) and your new enterprise just fell through (as newly-planted crops are submerged).

You have no house, no job, no money, no food and no means of getting any. And then your baby, who has been growing weaker every day, becomes sick, and you can’t afford the treatment.

This nightmare is unfolding right now for families across Niger. The failed harvest, rising food prices, and subsequent crisis have already caused malnutrition levels to rocket past emergency thresholds. Now the rains are compounding the situation by spreading diseases that contribute to malnutrition, and which malnourished children are too weak to fight off. It’s a viscous circle, a downward spiral. 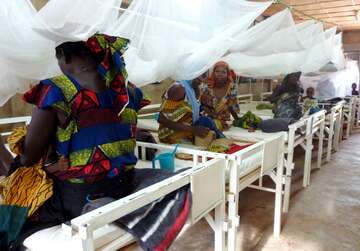 Last week, 2,400 children were brought to Save the Children with severe malnutrition.

That’s 450 more children than the week before.

800 more children than five weeks ago.

Almost 1,800 more children than in the last week of January.

This emergency hasn’t gone away. It’s still six weeks until the next harvest and it’s too soon to know how successful that will be. While 110,000 families have already been affected by floods, in other places families are suffering drought, in other places they’re fine. It’s erratic, it can change, but even if the harvest is successful this emergency won’t just stop.

7,100,000 people here have spent six months without enough food. Imagine if every person in Scotland didn’t have enough food for six months. Imagine what that would do to productivity, health, small businesses, social and family relations. Imagine the riots, the outcry from permanently hungry people who were educated and outraged and wealthy enough to have their voices heard. Now add another 2 million people to that, and imagine how loudly the Nigeriens would be shouting if they could.

And a poor harvest last year doesn’t only mean hungry people this year. It also means a lack of good seed to plant now, as the good seeds were used up last year. It means animals – savings accounts – have been without fodder for a year and their value has plummeted. It means 141,000 children have been so hungry and so ill for so long that they’ve needed medical care. For some parents it’s meant the death of their child.

This crisis won’t go away overnight and it won’t be solved with a few weeks of good meals. Families in Niger need food and health care now, but they also need support to help them recover from this crisis. That recovery work has to start when the harvest comes, in just six weeks, which means funding has to be made available now to prevent the impact of crisis from being prolongued.

Donate to our Niger appeal

Find out more about Niger