Is G20 the answer for global health? 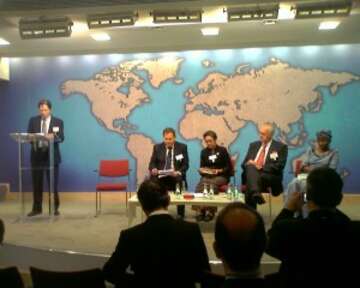 We have just had another G8 Summit. As other blogs here have discussed, there are clearly problems with the G8. Campaigners, lobbyists and developing country governments put huge amounts of time and attention into deceasing returns.

Both this year’s host, Canada, and last year’s, Italy, actually cut their aid budget in advance of hosting a G8 meeting which was supposed to boost donor efforts. This year, for the first time since 2005, the G8 omitted any reference to the commitment it made to increase aid.

The Muskoka Maternal and Child Health Initiative this year was the latest in a long-line of underwhelming G8 announcements, promising less money than is needed, too much of it recycled and uncertain about its actual delivery.

Chatham House, the London foreign policy centre, is hosting a meeting today called “What is next for the G20? Investing in health and development,” debating whether the G20 can become a credible forum for global health.

Under the Chatham House rule, I should probably not record who said what, but the debate has been interesting but inconclusive. It is not clear that the G20 is going to take on the development agenda at all. South Korea, host of the next G20 meeting in November, wants to include it; others think this remains a G8 topic.

Some think that the inclusion of “emerging economies”: Brazil, South Africa, India, Korea, Indonesia, Argentina, Mexico and China means that there is greater legitimacy and more of a voice for the world’s poorest.

Many of these countries still receive aid and have huge inequalities and poverty in their own countries. Some people are arguing that development needs to stop being addressed as a charity issue but as an economic issue with the G20 defining the econominc crisis more broadly and ensuring that growth benefits poor countries and poor people within it.

It is possible that the G20 might give a new lease of life to discussions on global health which have been on a downward trajectory since Gleneagles in 2005.

I wonder if the G20 might actually be worse. These middle-income countries have a very different agenda to the least developed countries. They are much more focused on “non-communicable diseases” – heart disease, smoking, road traffic accidents – which affect countries as they get richer and less on the need for basic healthcare.

The Least-Developed Countries might get even less of a look-in than they do currently. It is even possible that the very illegitimacy of the G8 meetings was our great opportunity. It was so palpably unfair that the seven richest countries (plus Russia) were excluding other countries from their discussions that they maybe they felt that they had to show that they were aware of global poverty.

Will it work the same way with 20 countries?