India: At the Chief Minister’s residence 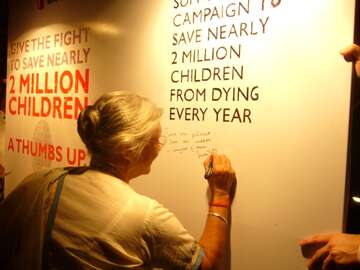 Sometimes working behind the scenes can be as interesting as being on the frontlines. This was a big moment for Save the Children India‘s EVERYONE campaign: a reception hosted by Ms Sheila Dikshit, chief Minister of Delhi, India’s capital, at her residence.

So there we were, the two of us, ensuring lights, sounds, camera for the EVERY ONE event while her office staff were preparing for the evening dinner, making sure everything was in keeping with the stature of the head of the state.

While the Chief Minister (CM) runs the state, there is an efficient team running her office, including security, logistics and administrative staff, a press office and her personal assistant. They are all powerful in their own ways, sharing a closeness of trust with the seat of power.

Whiskey (yes, that’s what the CM’s dog is called), came prancing around as we set things up. Her daughter accompanied the dog with an offer of fresh lime juice — welcome respite to the sweltering heat.

Before the delegates arrived, we had to brief the Chief Minister about the EVERY ONE campaign, aimed at stopping children under the age of five dying from easily preventable causes. She graciously ambled out of her living room to meet the event/ campaign managers. Yes, that was my five minutes of fame with the CM.

Guests started pouring in, including Ambassadors, CEOs of Save the Children Member countries, corporate honchos and us, to the well-lit lawn.

The chief minister led every one present to sign up their support to the campaign. Placing her thumbprint on a specially-erected wall aimed at mobilizing messages of support for EVERY ONE, the Chief Minister joked that she wouldn’t normally put her thumbprint on a blank wall but was making an exception in this case considering it was a pledge of support to save the lives of children. Her message: “Save our planet, Save the children – Every One of them.”

Find out more about the EVERYONE campaign in India.