Today I left the relative comforts of Niamey and headed to Maradi province — an area of Niger that has some of the worst-affected pockets of hunger in the country. Tessaoua is one of these pockets, an area where Save the Children is the only aid agency working. As I found out today, our work here is absolutely crucial to saving children’s lives. 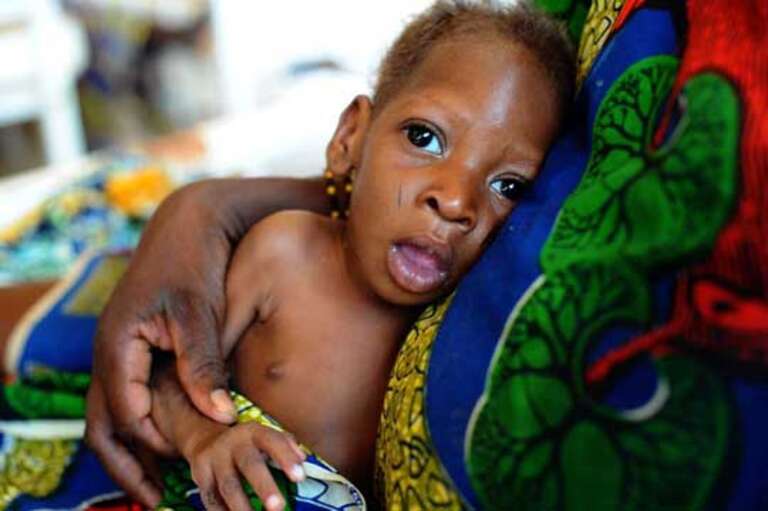 I went to a hospital where we run a stabilisation clinic — basically this is the place where severely malnourished children are brought, when they’re at deaths’ door.

The first baby I was introduced to was Salaha. She is 18 months old, but she is a tiny little thing. When she was admitted to the centre she only weighed 2.8 kg. The nurse told me she wasn’t far from death. I could  believe it, as I thought she looked far too scrawny even now, two weeks later. The nurse took out his phone and showed me a photo he’d taken of her two weeks ago — she had huge sunken eyes, paper thin skin and tiny limbs. Her head looked far too large for her body.

Having spent two weeks in the centre she now weighs 4 kg, which is not much heavier than a newborn in England. But, compared to the photo I’d seen, she looked a picture of health.

Looking around the clinic it was depressing to see so many severely malnourished babies, with many struggling to take breath after breath. But seeing how well Salaha had recovered really gave me hope. It made me see the babies in the clinic in a new light — seeing them on the route to recovery rather than the desperate state they are in when they arrive.

It’s amazing what very simple treatment can do. It really does save children’s lives.