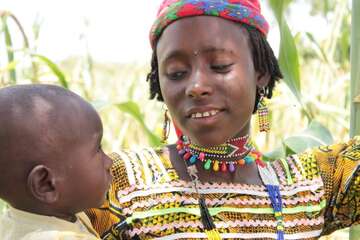 Tsahirou was brought to Save the Children in May this year. He was suffering from severe malnutrition and diarrhoea; he needed oxygen and antibiotics.

But, after just ten days of treatment, his health had improved so much that he was able to feed, smile and play.

At the time, his mother Salmey told us: “When we first arrived, he was barely even conscious of what was happening, but now he’s doing much better and he is getting his health back.

“Before, I couldn’t even smile. When I brought him in he was suffering so much that I couldn’t smile. But now he’s getting his health back, and I’m smiling again.”

This week we went to see Tsiharou in his village. It took three hours to drive there from the nearest city, first along a tarmacked road, then a gravel road, then a sand path that weaves over dunes through the slender ripe millet, and then a short walk to a clearing with three mud brick houses and a yard.

We sat together with Tsahirou and Salmey, his mum, on a blue mat under a shady tree. The fragile, skeletal baby had been replaced by a healthy round little boy. It was wonderful to see.

“When I went there to the Aguie health centre Tsiharou didn’t know where he was, what was going on,”  Salmey told me. “He received treatment for many things. I stayed there with him for 26 days.

Overall, it’s been a good growing season. Crops are ripening, the landscape is green. In some places the harvest has already started.

Salmey and Tsiharou are surrounded by strong tall millet and sorghum stems; their food for the coming year. The rainy season in Niger is coming to an end, and the drier air should give Tsiharou the opportunity to recover completely.

But the problems in Niger are far from over. Around 7 million people have suffered from the lack of food this year – an emergency of that size doesn’t go away overnight.

And the crops in Salmey’s field won’t be enough to see her through until the 2011 harvest. But now, even while there’s still vulnerability, there’s also health and hope in this village.

It’s a good reminder to stop and think about the 200,000 children who have needed emergency care this year and who have received it, and to smile at the thought of the vast majority of those children who are now able to play with their mother under a tree.

You can help us ‘press for change‘ to tell world leaders that it’s now or never to stop children dying like they promised the world’s poorest in 2000.