Poverty, crime and polluted ‘klongs’ (canals) is what most people think of when they hear the words Klong Toey. One of the oldest and largest slums in Bangkok, Klong Toey, located near Bangkok’s port, is home to many rural migrants from Northeast Thailand who come to Bangkok to earn much-needed income for
themselves and their families.

Living in makeshift wooden shacks on narrow ‘sois’ (lanes), the slum dwellers of Klong Toey suffer from fires and floods destroying homes and belongings on a regular basis.

They also constantly face threats of eviction from city authorities because of a lack of legal rights to the land they occupy.

When the earthquake struck Haiti on January 12 affecting almost a million people, there was an outpouring of the world’s thoughts and compassion to the small island nation. As celebrity telethons in the US and UK helped raise millions of dollars for Haiti, Thailand also managed to raised no more than 15 million dollars.

None however, expected any of the 15 million to come from the slum community of Klong Toey, after all poor people are not seen as able to give assistance but only to receive.

However, for the slum dwellers of Klong Toey, the loss suffered by the Haitians half way around the world, was, for many of them, something they could relate to and, despite all their difficulties and hardship, they felt they needed to do something to help. 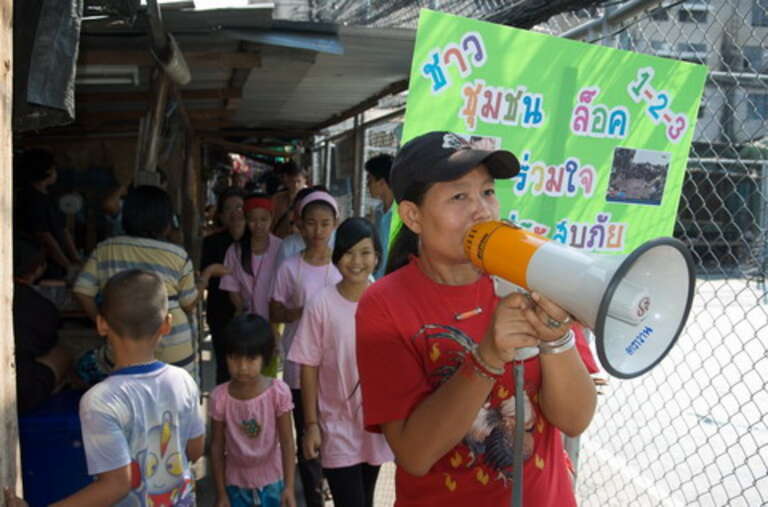 Therefore, to mark Valentines Day, the Klong Toey slum dwellers and 50 squatter communities of Bangkok held a fundraising event to help the Haiti earthquake victims with help from the Duang Prateep foundation, an organisation that has been working with urban slum communities since 1978.

“People in Klong Toey face many difficulties, from drains bursting into floods, and fires destroying their houses so people really understand how it feels to lose something… “When people saw what was happening to Haitians on television, it struck a cord with them,” said founder, Prateep Ungsongtham Hata.

Community youth members equipped with mega phones, donation boxes and signs saying “slum dwellers unite to help Haitian friends” walked along the allyways stopping by anyone or any home interested in making a contribution. 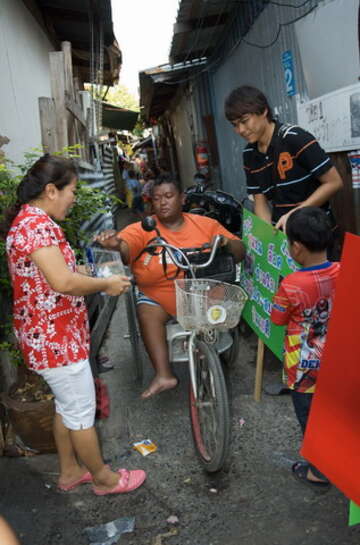 Ms Prateep recalls Mr Winnai, an amputee, one of the Klong Toey residents who approached the donation team on his wheelchair to pledge his donation.

“Mr Winnai’s words were so memorable. He said that even though we are poor, we are better off than the Haitians because at least when we don’t have food to eat we can still go to the Wat (temple) but all the Wats (temples) in Haiti have been destroyed,” said Ms Prateep.

“We managed to raise more than 100,000 baht (2,700 GBP) that day and we would like to make a donation through Save the Children an organisation who helped our work tremendously during the Thailand tsunami response in 2004,” said the former slum dweller and winner of Asia’s version of the Nobel Prize – Magsaysay – for public service.

Save the Children assisted Duang Prateep Foundation’s (DPF) work during the tsunami by providing emotional-support activities—including theatre workshops, puppet caravans, children’s camps and day trips, for the affected children DPF was working with.

Greg Duly, regional director for Save the Children UK in Asia, who received the donation on behalf of the organisation, told Ms Prateep: “Slum dwellers often live in difficult social economic conditions and this show of generosity from the people of Klong Toey needs to be acknowledged and publicised – it’s really an inspiration to us all”.

Haitian-born Marie Ange Sylvain-Holmgren, a long time friend of the Duang Prateep foundation, who came up with the idea after talking to the slum dwellers said: “When these people give its from the heart”.

People give a big warm smile when they fold their wrinkled notes and slot them into the donation box.

I’ve personally lost 11 of my family members and been to four funerals already so the warmth shown by the Klong Toey community is invaluable.