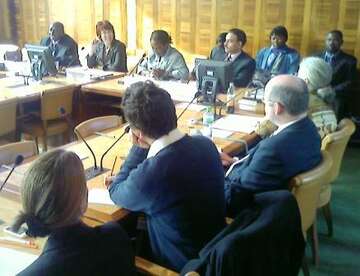 The 2010 World Health Assembly is drawing to a close today. Generally it has been a positive one, with a new agreed code of practice on international recruitment of healthcare workers and a strong resolution on infant and young child feeding which increases scrutiny and regulation of food manufacturers.

Last night, together with five other NGOs, we organised a very well-attended side meeting which looked at financing for healthcare and the human resources crisis. Dr Komba-Kono, Minister of State in Sierra Leone, and Dr Beatrice Dahn, Deputy Minister of Health and Chief Medical Officer of Liberia, gave powerful talks about the processes by which their countries decided to abolish direct payments for maternal and child healthcare.

This issue has been getting a very clear consensus in all meetings here. Liberian President Ellen Johnson-Sirleaf gave the keynote address to the assembly and made the best argument for this policy I have ever heard.

Jeffrey Sachs, doing the star turn at a packed the lunchtime meeting on Wednesday, was also the clearest (and loudest) that I have heard him to date, saying that charging the poor direct payments to access healthcare is totally wrong and must be stopped.

Our meeting spent time looking at both the financing and expansion of health workers; concluding that both are interdependent and need to be addressed but essentially, we have to have an approach that focusses on people’s human rights. This means that we must always start from the principle that health and healthcare are not gifts that some governments give to their people and are not a commercial commodity which some people can afford and some cannot. Instead, people need to know it is their right and their entitlement and they need to be supported to insist on these rights from their governments. This is intrinsic to Save the Children’s approach and seems to be shared by most of the health community here at the World Health Assembly.

A lot of the discussions here was structured around what is going into the UN Secretary-General’s Global Action Plan for Women and Children’s Health, a document which Save the Children has been contributing to. A draft is being consulted on, including a session here. Much of it is positive, but it needs to become a more specific document to be able to hold governments to account.

It also needs to push donors to coordinate their aid instead of having so many conflicting projects funded in different countries. For the time being though, after five days in windowless rooms, it is time to go out into the sunshine and head home.