Following the World Cup in Haiti

It’s hard to believe that 6 months have passed since the earthquake in Haiti. Hard for a variety of reasons. Firstly, (apart from the sudden flurry of media attention inspired by the passing of an arbitrary period of time: 6 months), the collective suffering felt by Haitian people and the hard work of organisations like Save the Children have fallen off the radar of international media interest.

Obviously, this is an understandable given the way big media conglomerates operate. But it can be frustrating when public awareness of the current issues is so important to enable successful advocacy for change at a structural level — for instance in holding donors to account over funding commitments.

Secondly, it is easy to arrive in Haiti and think “six months on, and it still looks like this?”. A drive around the rubble-lined streets takes you past hospitals, schools, shops and houses lurching perilously to one side, or clinging desperately to precipitous slopes, each with jagged cracks, zig zagging from corner to crumbled corner.

But the scale of this clean-up task really is huge. Having been in Haiti for three weeks, and having seen the humanitarian community’s response from the inside, I’m left with two clear impressions: yes, there is still a lot to do, but a great deal has already been done.

The third reason is perhaps the hardest to accept and by far and away the most moving and inspiring.  Amongst the rubble, next to the decrepit buildings, alongside the broken schools and hospitals – life goes on.

There’s a vitality of spirit amongst Haitians that seems not to have been diminished by the devastating and deadly earthquake which shook the nation six months ago. Perhaps this is in part because of their resilience, strengthened after years of enduring hurricane damage. But given the unprecedented scale of the earthquake, this can’t explain it all.

This ability to recover and get on with whatever life throws at you was reflected in the World Cup Fever which captured the imagination of all Haitians. Just as in almost every corner of the world, people were drawn together by the competition, and supported their nation’s team, or that of another, adopted nation. Haitians seemed to be split between Brazil and Argentina — two favourites to hold the trophy last Sunday.

One day, as I was taking a break outside the back of the Save the Children office in Port-au-Prince, I heard a huge roar from a few meters down the hillside. My first thoughts were of ululations at a funeral, or violent shouts during an angry demonstration. However, it quickly became clear that the screams were of joy, as Brazil had scored a goal. 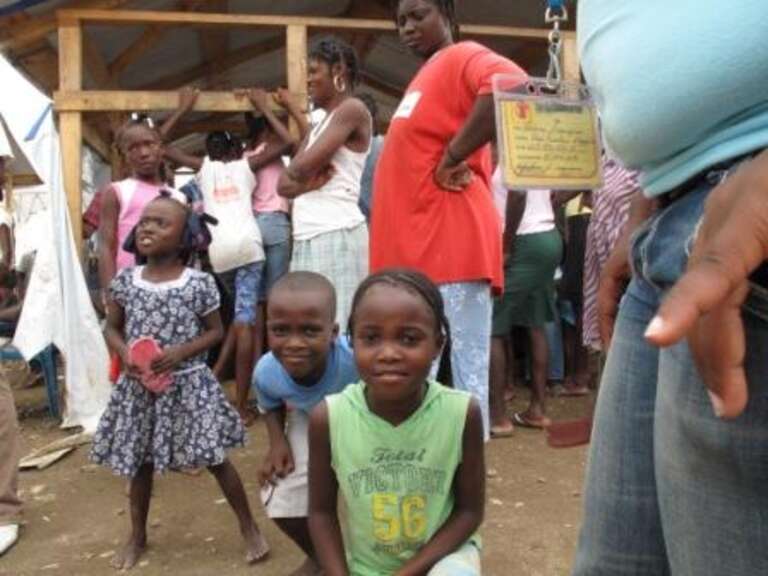 Neither Brazil nor Argentina won the World Cup. In fact, both teams did less well than anticipated. But, as Haitians well know, life doesn’t always go as you expect or want it. Yes, it’s important to remember those who died in and after the earthquake, and to support those whose lives were changed irrevocably. But it’s also important to appreciate the spirit and strength of these people. Doing so will temper pity with respect and admiration as we look to continue to support this inspiring nation get back on its feet.

Watch films made by children of their lives in Haiti