DRC: Modern technology and a plan for Masisi

I’ve just been trying to upload some fantastic new film footage of a teenage boy being reunited with his family after years in an armed group, to share with you and my colleagues in London.

A picture says a thousands words, so here are two screen shots, taken five minutes apart, to illustrate how successful I was in my endeavours. Pay special attention to the ‘estimated time remaining’. 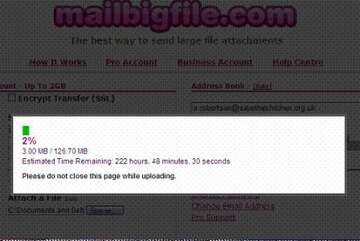 Aren’t they wonderful? In the UK it’s easy to forget that a large portion of the world faces such obstacles with online communications.

In other news, I’m hoping to go to Masisi Territory tomorrow, an area in the eastern Democratic Republic of Congo. Thousands of people have been displaced into Masisi from the surrounding areas because of fighting, and other people are starting to return home there from earlier displacements.

Some of these people have been refugees for years. That means the health system, schools, land, water, wood, food, everything is under massive pressure from the number of people arriving, almost all of whom need immediate support. Imagine being forced out of your home for months, or even years, with little access to clean water, clothes, first aid, or even a latrine. Then you return home and you still have nothing, but you’re weaker than when you left. Where would you even start to rebuild your life?

Save the Children has been running health care, nutrition and education programmes in Masisi for years. What I want to know though is what these facts actually mean for children living there. I can imagine, but I want to know.