The Congo: Schools under attack

They’re using a human skull as a teaching aid. It has bullet holes in it. It’s sitting on a shelf beside a globe and a kilo weight, staring blankly at the door. 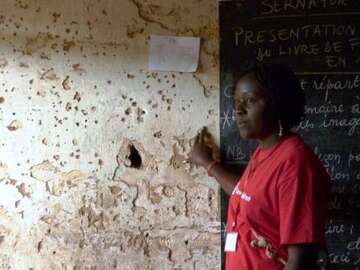 Between the door and the blackboard, more bullet holes pepper the classroom wall.

Children congregate at the end of building for a photo. It’s been damaged by rockets.

I’m feeling nauseous. I don’t know why any of this surprises me any more — I’ve been here for two months, I know what’s going on now and what has happened before. But using a murdered man’s skull to teach primary age children? It’s left me reeling.

Caught between two fighting forces, this school is either a building full of students, potential soldiers, or young people loved by the people you hate.  It’s a place to learn peace, a base for your troops, or a stronghold for the opposition. It cultivates tomorrows’ teachers, todays spies, or rebel leaders of the future. From at least one of these perspectives it makes sense to brutally attack a primary school.

Schools are often attacked by rebel groups because they hope to ‘recruit’ the students (often at gunpoint) as combatants, or use them as cheap labour around their camp.

In a society which has experienced such extreme violence first hand, an old skull being used as a teaching tool probably seems a bit bland. I just really, really wish it didn’t.

A lot of people ask why we focus on education in emergencies. Surely it’s not as important as water, food, shelter? I disagree. Food, water and shelter protect a child’s physical health, but a child is more than just a pulse. Invest in eduction and you protect children’s mental wellbeing as well.

In the DRC, we don’t just train teachers to teach well. We teach them to protect children in school from all forms of abuse, and we build their knowledge of children’s rights. This school is a stark reminder of how important that is.

Read more about our work in the Democratic Republic of Congo.

Children and school buildings are increasingly becoming targets in conflicts across the world. Find out more.