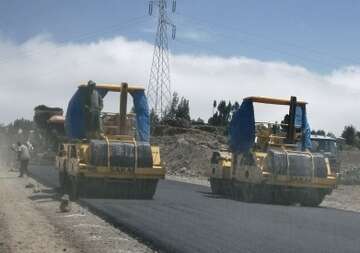 The journey from Addis Ababa, where colleagues from across Africa have been meeting to plan our EVERY ONE campaign to Dessie, where Save the Children has health programmes, is 400 km and took 9 hours. This is even longer than usual due to the huge amounts of road-building going on, even on a Sunday.

The current Ethiopian government decided that improving the road infrastructure is its top priority for developing the country. The previous government chose illiteracy reduction as its priority. As you bounce around the potholes and imagine how much worse it will be in the rainy season, it is hard to disagree. For economic development, being able to move people and goods around the country is essential. For health services, as well as investment in staff and facilities, you need supply chains for medicines and equipment.

The thing you notice immediately is that it is mostly Chinese contractors building these roads. Sometimes this is with Ethiopian labour, but sometimes with imported Chinese labour. China’s new relationship with African countries is unmissable if you live and work here.

Whereas traditional donor countries in Europe and North America are now, to varying extents, untying their aid (stoppng insisting on it being spent in their own countries), trying to ensure that human rights are respected, and taking anti-poverty as its first priority, China’s approach is very different. They do not pretend this is anything but a business arrangement. In return for building infrastructure, they negotiate trade agreements with countries to give them access to natural resources and markets. It may also be a political arrangement: I was told China has just built Malawi a new parliament builing. Of course, we in Europe cannot claim a perfect record either. This is exactly how Europe’s wealth and power was accumulated. And to prove it, our excellent driver Endele shows us a relic of the last time an external power built roads in Ethiopia. Above the entrance to this important tunnel through a mountain – although the letters have been removed and painted over – you can still make out one word: MUSSOLINI.