After two receptions, eight fringes and three Sunday mornings at Euston, the conference halls have emptied and the secure zones have been dismantled.  There’s just time for a quick look back over Party Conference season before minds turn permanently to the stormy clouds of tomorrow’s Spending Review.

With a Lib Dem Conference featuring government ministers, a new Labour leader, and the first Conservative Conference with the Tories as a governing party since 1996, this was an historic conference season.  The sheer volume of events with an international development focus at this year’s conferences is testament to the fact that, even in an ‘age of austerity’, there’s still much interest among the political classes in development issues.  The crowds of delegates attending Save the Children’s receptions and our fringes on fragile states, population growth and child poverty in the UK also demonstrated that there’s an appetite for action on these important issues (as well as canapés!).

The receptions we held at the Labour and Tory party conferences were a chance for attending party members, MPs and journa 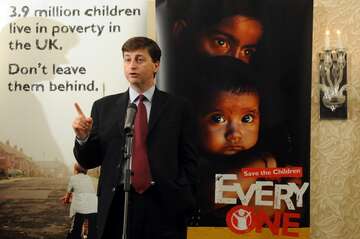 lists to learn more about our work around the world and in the UK and to hear from senior Government and Shadow ministers.

In Manchester, Stephen Timms highlighted Save the Children’s work on the Child Poverty Act while Douglas Alexander – about to swap his development brief for work and pensions – stressed that, both at home and abroad, working to eradicate child poverty is “not only the right thing to do but the wise thing to”.

Negotiating their way around the labyrinthine conference centre in Birmingham, Conservative delegates also attended a packed reception that we held in partnership with ConservativeHome.  ConHome’s editor, Tim Montgomerie, spoke passionately about his vision for social justice and introduced the conference Man of the Moment, Iain Duncan Smith, fresh from successfully making the case for his vision for benefit reform.  Speaking without notes and straight from the heart, Duncan Smith stated his personal commitment to ending child poverty in the UK through benefit reform to make work pay.

At both events, ITV journalist Emma Murphy also introduced Save the Children’s inspiring partnership with ITN and spoke about our work together with children in Haiti.  There, children living in the aftermath of the earthquake are better able to come to terms with their experiences by Filming their Futures. 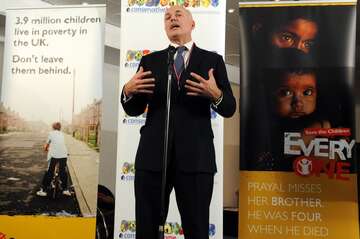 At all three conferences, Rageh Omaar chaired our fringe on Fragile States: Afghanistan, Pakistan – how do we win the peace? It was a chance for Save the Children to highlight the child survival emergency in Afghanistan and to press ministers including Henry Bellingham and Jeremy Browne to prioritise humanitarian concerns in the region and elsewhere.  The complex int 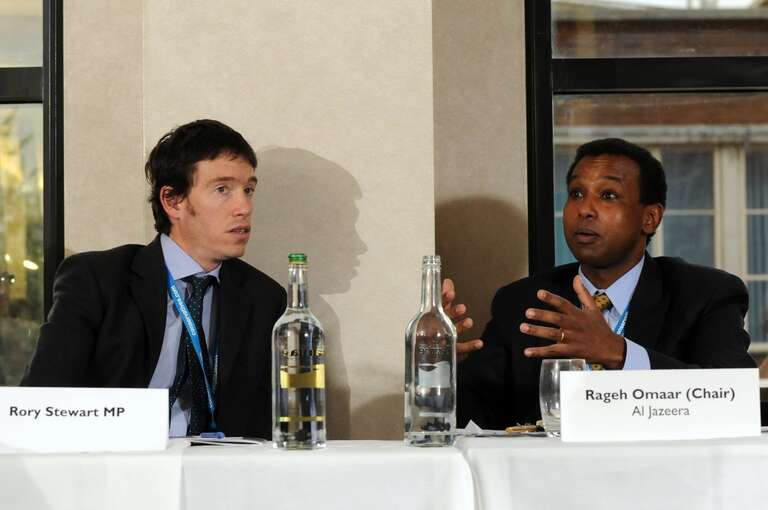 erface between security and development was a common theme in the debates, with Douglas Alexander making the case for security as a basic right and IDC Chair Malcolm Bruce stressing the importance of women’s rights.

In a rejoinder to increasing linkage by the government of UK interests and action in fragile contexts, newly elected MP Rory Stewart called for discussions about humanitarian crises to take place ‘without invoking national security’.  He warned of the dangers in assuming that failed states were the most dangerous and engaged in a lively debate with Professor Paul Collier – who is credited with coining the term ‘fragile states’ – over the importance of political analysis in such countries.

Partnering with environmental think tank Population Matters, we also held an event to highlight the impact of the rising global population – an issue that is rarely discussed either by politicians or by the development community, but of critical importance.  With world population predicted to stabilise at anything between 7.8 and 11.8 billion by 2050, the consequences for poor countries could be enormous.  Foreign Affairs Committee Chair Richard Ottaway and Shadow Development Minister Gareth Thomas joined us and agreed that a rights-based approach – empowering women to make informed family planning choices – was at the heart of stabilising population levels and meeting the MDGs.

On the domestic side, Save the Children partnered with think tank Demos to deliver fringe events at each conference: Tackling child poverty in an age of austerity, with panellists including Minister for Children and Families, Sarah Teather; Minister for Disabilities, Maria Miller; and Shadow Leaderof the House, Hilary Benn. Chaired alternately by Times leader writer Philip Collins and Demos Director Kitty Ussher, panellists debated the essential elements of the government’s first child poverty strategy due to be published in March next year.

Young people from our Inspiring Change projects in Bradford, Oldham and Newham spoke passionately about the reality of growing up in poverty, making a plea for government to listen to the voices of children in setting their child poverty strategy.  Ministers Sarah Teather and Maria Miller reaffirmed the coalition government’s commitment to ending child poverty by 2020, with Maria Miller deploring the high levels of severe child poverty (referencing Save the Children’s statistics) and stating the government’s commitment not to leave those in the most deprived circumstances behind.

Find out more about our work in the UK