I am the events organiser for a pioneering theatre production called Listen to Me: True Stories from Marginalised children around the World. This production is a collaboration between three charities: Save the Children, EveryChild 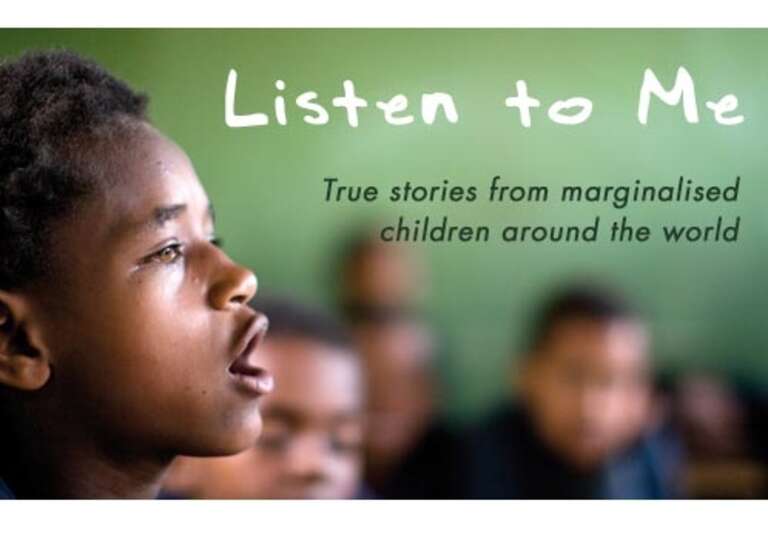 and iceandfire. It has been no mean feat coordinating three organisations two days a week!

However, I can firmly say that it all became truly worth it when I read the script. It was written by Christine Bacon and Sara Masters at ‘iceandfire’ using the testimonies of children from India, Bangladesh, Ukraine, Malawi, Guyana, Cambodia, Columbia and Wales, and it is so evocative.

The children’s stories in their exact words jump out from the page. It really hits home that children are suffering in so many ways all around the world. I’m sure that seeing these stories performed on stage will only increase their poignancy, and create an urgency to act among our invited audience.

The performance is an innovative way of commemorating the 20th Anniversary of the signing of the United Nations Convention on the Rights of a Child (UNCRC). Now I must shamefully admit that I didn’t know what this was before I started work on this project so for those of you in my position let me try to explain it in jargonless terms:

Maybe I am being naïve or utopian, but surely this is the least that a child has the right to? These are all things that I took for granted when growing up, however some of the children in our stories have never had any of these things. They have had to fight for all of them.

Hearing stories of children wrongly imprisoned, in bonded labour, witnessing extreme violence, with no access to schooling, or living in extreme poverty makes you realise that there is still a long way to go. The Convention still has a lot to prove.

Listen to Me was written as a plea to governments all over the world to recommit to the UNCRC and make children’s rights a priority.