Two weeks have passed since we first came to Nairobi and met the beautiful children at Mashimoni Squatters School and the smiling faces at TBH Children home. Yesterday, we had to say goodbye. It was so hard to greet these kids that we now know by name and have learned a bit about each of them and then all of a sudden you are gone. One bright boy, Paul, kept asking me these full on questions (in between: ‘Do you know Rambo?’ Does he live in your country? Have you see him with your own eyes? Can I meet him, and then the same with Jackie Chan and Bruce Lee) about whether I will be back. When will I be back? Will I see you on Monday? I broke my heart to have had to say nope, I will be gone. Found out afterward that he decided that he loves me. Said it in this sweet voice, that in the bottom of his heart, he knows he loves me!!

The school in the slum was even harder to say bye too. Ok, I know you are not ever supposed to have favorites, but Abel, that I told you about before, might just be up there with my favorites. He was in my class yesterday, and had this little one-year-old with him. Queen he told me was her name, and she is his little sister. Apparently his mum left her at home on her own, he wanted to come to school, so the only option was to bring her along. She is so cute, and I took about 10 photos of the two of them. How amazing? 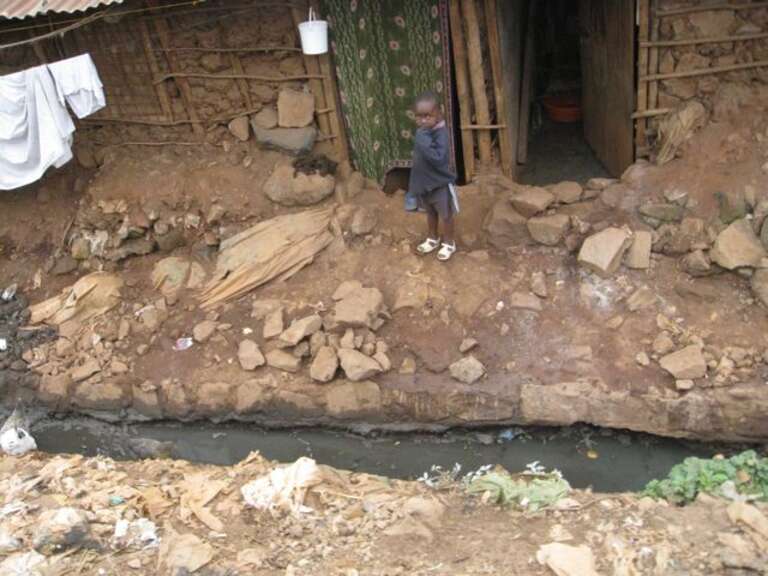 Finally said goodbye, and our driver took us out of the slum on a different route. In my life I have never experienced anything like the stench that came up through the windows. The whole of Kibera is built in a dip and if it rains everything goes to the middle. We drove through and around to the top, where you could see all around the slum half built huge blocks of flats, like council estates. Apparently the government promised to build housing for the slum community but as soon as the election was over, nothing has happened since… it’s a graveyard of half-built flats… It made me think. How will this work? The slum has been around for 60 plus years. Some people know no world outside the slum. There are shops and little markets set up everywhere through out the slum. What will happen? Will the government provide work? training? a new sort of livelihood for people who have used their environment to make their worlds work? I have no answers, only questions.

Last night we said good bye to the kids at TBH. They had a talent show during the afternoon and a party for them in the evening. In my life I have not seen so many kids move. Even the babies were bouncing around, and at one stage we had 10 kids between 1 and 4 on the stage moving around and doing moves that I don’t think I could do! They are just amazing and I will miss them so.

Monday morning at 6 am ( that is 4am UK time!!) I will be on a flight with the UN to Dadaab, and the refugee camps. I can’t wait to see the work that Save the Children is doing up there, meet the people and our staff that do amazing things up there. Winter has finally settled into Nairobi (well, if you can call 18 degrees winter, but it’s still freezing after two weeks of sunshine and high 20s!) and I look forward to the heat of the dessert in Dadaab. I can’t believe this life-changing adventure will soon be coming to an end. I will never be the same again. Till my next blog.