Putting food on the table in Vietnam

A few days after I’d just got back to Bangkok from a trip in Vietnam, Cyclone Ketsana stormed through the central coast of the country. More than 100 lives were taken while schools, hospitals and homes were swamped away by flooding caused by the storm serge.

I was in Yen Bai, a province seven hours drive north of Hanoi, the country’s capital, before the typhoon struck. I spent most of my time there listening and trying to understand the hardship and pain families had to go through after losing a loved one through a natural disaster. However, like typhoon ketsana, the mass flooding in Yen Bai didn’t lead to many casualties, as locals were prepared, and managed to evacuate in time. But what they were not able to do was protect their rice fields, livestock and homes.

People in rural Vietnam don’t spend money on rice; they grow their own on their three Sao (1080 m2) paddy field. The rice is normally enough to last the family the whole year. Some families might have pigs or chickens which they can sell to earn extra income to buy necessities such as meat or vegetables (if those families don’t have vegetable patches), clothes and school supplies for their children.

If the money’s not enough, parents might head to the nearest town or city to do odd jobs or construction work to earn an extra income.

Families don’t have savings, and the damage caused by natural disasters have created serious financial problems for them. 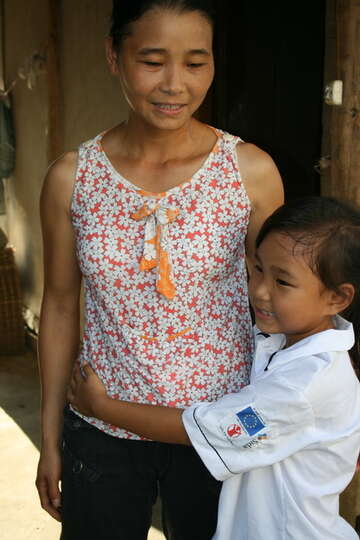 Even though a year has already passed since the flooding that devastated her community, Nguyen Thi Lung, a mother of little nine-year-old Anh, in Yen Bai, told me that she still finds it hard to put food on the table. The landslides caused from the floods destroyed her rice and corn crops and bulldozed her home.

“Half of our livestock died during the evacuation, and those that survived died of diseases later,” she said.

Immediately after the disaster, Save the Children provided the family with rice to eat, wheelbarrows to clear the debris from the paddy field, new rice seeds to grow, and a school uniform for her daughter.

However, Lung and her husband were only able to clear one Sao (360 m2) of land good enough for cultivation, which would only yield a third of what they needed to eat. This meant the family needed to spend money to buy rice.

“But we’re already in debt from the construction costs related to rebuilding our new home. I have to borrow money from friends and relatives to pay for the bare necessities…”

“My daughter has been eating just rice and vegetables for a while now because we can’t afford to buy new livestock, or to buy meat and eggs,” Lung said.

More than a quarter of a million families are now facing similar situations to Lung. Adequate food is the biggest concern now for families.

Children are most vulnerable in an emergency, and if they are malnourished they become even weaker and are more likely to succumb to diseases, like diarrhoea – which can be fatal.

Save the Children is now distributing 40kg of rice to 20,000 families to help the most vulnerable through the difficult times ahead. Rice can provide enough calories for a child, but it’s not enough to provide a good diet.

Vegetables, crops and livestock destroyed or killed during the typhoon are vital sources of micronutrients and protein. Vhildren need to help them grow up healthy.

As I prepare to go back to Vietnam on secondment as part of the typhoon response this Sunday 18 October, a day after my 30th birthday, I think of Lung’s family and how many more families I’ll meet in situations just like hers.