I’m not a psychologist; I’m just a simple documentation, communications and media person working in this field for almost 8 years. However, I’m a fan of psychology books and have learned many things about this human science that are especially related to the psychology and mental health of someone living in Gaza for more than 11 years. 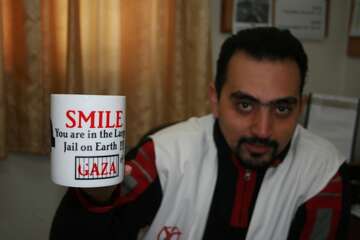 Recently, I was selected to join the training of Save the Children’s new Global Standby team in the UK, which I considered as an  achievement of one of my life’s dreams.

I applied for a UK visa, and I knew at that time that it was a little bit late — but that wasn’t the main problem.

The real problem was, after getting my UK visa, that I had to arrange travel to the UK from Gaza, which has been under intensive blockade, for more than two years.

This meant that after getting the UK visa, I needed to get a Jordanian visa, because I’m a holder of a Gaza ID, and all Palestinians holding a Gazan ID card are not allowed to enter Jordan unless they have a special permit.

After getting a UK and Jordan visa, I coordinate with the Israeli authorities to cross the famous Gaza-Israel crossing, known as Erez, and then travel to Allenby bridge, cross into Jordan, spend a night in Amman, and then fly to the UK! What a nice trip?!

The other option is to leave Gaza through the Gaza-Egypt border, or Rafah Crossing, which is another heart attack. This border is mainly closed after Hamas took over Gaza by force. Now, the Rafah Crossing is opened for only two days every two months. There, I need to register with the Hamas authorities in Gaza to allow me out, and I need a very very special coordination to cross into Egypt, otherwise I will be deported (as a criminal) from Rafah to Cairo International Airport, staying there (in the basement) until the time of my flight to the UK.

Even if I had been fortunate enough to make it out this way, after the end of the training, I would have had to stay in Cairo airport’s basement (The Hotel of Gazans) on my way back to Gaza from the UK,  until the border opened again, after around one month.

Anyhow, the Global Standby Team training started before I obtained my UK visa, which meant no Jordanian visa nor Israeli nor Egyptian coordination!

On 08.11.2009 (the first day of the training) I felt so frustrated, and I was looking at all the emails that I received from the training team telling me how to go from Heathrow airport to our office in London, and started imagining how it would be if I were able to go.

A part of me felt happy that I was feeling sad! In Gaza we start to forget that we are living in unnatural living conditions. We begin to feel less sad that we aren’t able to leave Gaza; when there is gun firing on the beach, we don’t feel that this is an assault against us — so long as the bullets don’t reach us. We begin to feel that the daily incursions taking place aren’t as dangerous as they really are.

I do think this part of the negative resilience; we’re becoming resilient to a level where we can forget that this situation is not a normal one.

We need to be reminded that we are resilient people living in a weird situation. Unfortunately we, as Palestinians living in Gaza, have reached a point where we consider the unnatural to be natural.