Hunger and hope in Ethiopia

A double first for me – my first time in Ethiopia and my first chance since joining Save the Children to see our programme work first hand. Meetings with the country team in Addis Ababa are a reminder of the remarkable scale of our work here, with close to 700,000 children reached in total in 2008-09, and with our work in hunger reduction alone reaching more than 400,000 children. But as Tanya Steele and I arrive in Lalibela, a short flight north from Addis, we get the immediate chance to put the statistics in to human terms.

We visit a community therapeutic centre in the Bugna woreda, or district. Bettone has been brought to the centre by her father, as her mother is too sick to make the brief journey. She weighs 4.4 kg, and yet her father says that she is nearly three years old, a clear case of acute malnutrition. I remember that my own two children weighed nearly 4kg each at birth, as I watch the Save the Children nurse carefully examine the child and provide both plumpynut and antibiotics as a starting point for a child who needs to improve rapidly.

Here in the highlands of Ethiopia, where most people rely on subsistence agriculture to survive, Save the Children is working alongside the government’s productive safety net programme to combat malnutrition. In this area, the nature of malnutrition is chronic, and hunger causes stunting (short height for age) in children. Stunting in the Amhara region is 63% , one of the highest rates in the country.

At the therapeutic centre the weights and heights of the children are recorded, and the circumference of 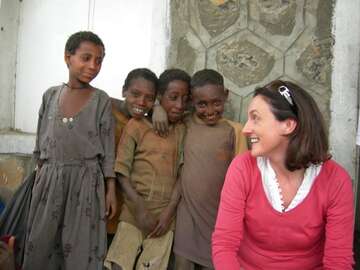 their upper arms are also measured, in order to indicate levels of possible malnutrition, whether acute or severe. Advice is also given to the families on child feeding practices, care for the mothers and hygiene in the households. On our return, we stop at the local Save the Children office and watch the data on the children being uploaded; this is recorded for the government and donors, and of course will help us work out how many children we have reached.

The next day sees us visiting livelihoods work alongside a local partner, the Organisation for Rehabilitation and Development in Amhara (ORDA). It’s an early start, made earlier for me by the local cockerel population holding choir practice outside my bedroom window at 4am. The harsh beauty of the mountainous landscape is striking; one of the team quotes a local saying that “all the mountains of the world came for a meeting here, and never went home.” We need the 4X4s though, as we head off down a narrow track sliced into the side of a mountain, and I can only admire the skills of the drivers in getting us to the remote village which is our destination. As I comment on this, the team smile and say that they’ve brought us to the easiest village to access.

First we see what is apparently technically known as a potable water supply structure – essentially developing a local spring by building a structure to deliver clean water by tap. Crucially, the local community has contributed, both in terms of building it, but also in taking ownership and responsibility for it going forward. Talking to the beneficiaries, they tell us how sickness levels in the village have dropped as a result of the cleaner water. Next up, at a different village, we see watersheds being built to prevent soil degradation on the steep slopes. This is a long-term intervention; it will take a couple of years at least for the benefits to be seen and in five years the quality of the soil, and hence the crops that can be grown, will transform the village. Again, the local community owns the intervention, providing the labour and the materials. 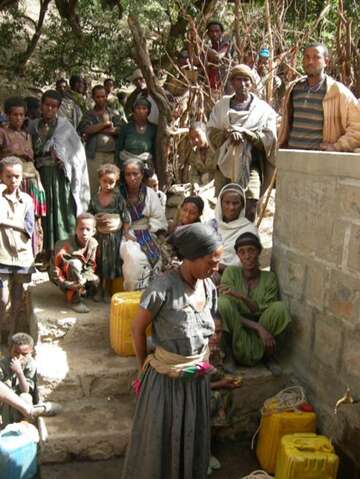 Finally, we see some small-scale irrigation work, again allowing a small rural community to grow more (and more diverse) crops. In this case they’re growing vegetables that can be sold on, bringing hard income and sustainability and allowing other communities to access food. Here, we get to meet Eshetu, a local farmer, who started out as a migratory worker. Benefiting from the safety net programme, and the irrigation, he showed us around his compound where he, his wife and three children live. He has livestock, a variety of crops including potatoes, cabbage and hops and even some beehives. He’s now accumulated enough wealth to graduate out of the safety net programme.

An added bonus as we return to Addis Abbaba is that we get a brief 6am visit to the monolithic churches at Lalibela, a UNESCO world heritage site, and an amazing collection of buildings hewn from volcanic rock in the 11th and 12th century. A reminder, if needed, that this is a remarkable country with an extraordinary history.

It’s the people I’ll remember, though, battling challenging conditions to survive, and the dedication of our Save the Children field staff, working in remote communities to bring change to children’s lives.