How could we ever complain about the privileges we have?

We have had the most amazing and informative day today, seeing both wonderful, and terrible things.

The day started with a rather grumpy trio at breakfast —  Douglas’ shower had come on full blast at 1am causing him to debate whether to get up then. In the end he resorted to advanced plumbing involving stopcocks. Sam had heard every dog fight and shout in the hotel and out and had hopped across the room in her sleeping bag liner in the middle of the night to get to something on the chair that was against the door to stop it opening. I actually slept quite well, although I was woken up just before the Mullah started the call to prayer, when a dove began coo-ing on my balcony. I woke up convinced that I was in Australia.

First, we went to the Save the Children office in Woldiya where we were warmly greeted by Commodity Manager Kessa Kinfie and other staff. It was wonderful to see the office, which seemed very efficient and calm. Mohammed Kebeda, the project manager in North Wollo, Ethiopia showed us around. We saw his office and the tea room, which is currently under construction.

The road outside the office was crowded with people coming into town for the market. There were goats, cattle, mules, donkeys and a few camels, but mostly people are carrying their goods, such as chickens or sacks of grain, on their shoulders.

We headed off into the most beautiful country. I had no idea Ethiopia would be so stunningly beautiful. This is not the image of Ethiopia that we see in the UK: fertile plains and terraced, steep mountain sides.

I saw tiny little hand-cut irrigation channels cross the road to divert even the smallest amount of water. Some were tended by small children. The driver drove very carefully over them so as not to damage the sides.

Every few hundred yards we would see another small group of goats, and sometimes a donkey or a cow, being watched by tiny children.

At first I thought they must be the same age as my son Laurie, who is six, but I quickly adjust my thinking to take account of the malnutrition that is prevalent here. In reality, they are probably 10 or 12.

Our driver, Kahsay Gabry-Tsedak, is brilliant at avoiding problems. He seems to be able to judge which direction an errant goat will head in. He cannot take his eyes off the road for a second. Small children and livestock line the road, but most dangerous of all are the huge rocks and boulders that litter the highway.

After about an hour and half of tough driving we arrived in Ahun Tegegn (which translates wonderfully as ‘now you have found me’). It’s a stunningly beautiful but harsh environment. Mohammed told us that he was taking us to a pond. We drove beyond the village onto a cattle track that seems to go higher into the mountain.

I suddenly wondered what would happen if the Land Rover we were driving in turned over and we were stranded here. We branched off onto grassland past small groups of livestock, and along a steep edge. The pond is a reservoir of rain water. Mohammed showed us how separate concrete troughs have been constructed for the cattle to drink from and for people to wash their clothes in, thus helping to keep the reservoir clean.

This is his project and he is rightly proud of it. A village woman with her baby approached us to tells us what a difference the reservoir has made to the village; now it’s easy to wash clothes, which helps the women. We took some photographs. I asked Mohammed how much the water project has cost to complete – he said US$ 5,000.

It struck me that it is pointless me talking on Thursday (at the Senior Management Development Programme) about the abstract delivery of results when there are people like Mohammed and his team here – this is the delivery of results written large, and I want to use it as an example. 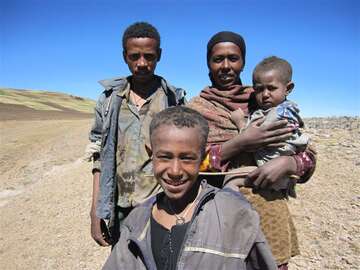 We went to the village where we were greeted by some of the senior men and invited to meet the community health workers in their small concrete room. We sat on a bench along a wall and was joined by Mulu Nigsie, Mulu Wondimu, and Meselu Kassa, three community health workers, and a cluster of teenage children at the door. Angagrie Molla, chairperson for governing the house of speakers (which has some 300 members making him an important local government official), is there too. I thank him for his welcome.

The health workers tell us about their work promoting breast feeding and also advising new mothers to rest (I wonder how realistic that is when they have to collect water and firewood?).

The two health workers have some questions for Mohammed. “Can our training be more than once a year? We need some stationery, when can some be supplied?” They also ask for other clothing; we have been providing T-shirts with messages such as ‘breastfeeding is best,’ but these don’t last, are inappropriate for the weather and, they feel, for dressing modestly. Mohammed says that some dresses and scarves are being organised.

Save the Children has been encouraging people to use a circular stone cooker to cook ‘injera’, which uses the fuel more efficiently. We visited a family hut to see one.

We meet the man responsible for the children’s committee. He has 176 children on his committee across several villages. They work to involve children in taking responsibility for themselves. They educate them about HIV/AIDS and other health issues.

Getamlak Degu, who is working with them, was inspiring. He and the ‘cabale’ leader have plans to establish a children’s parliament in the region. It is children’s advocacy in action. One of the committee members tells us that they have started a football team, but have no football. Could Save the Children help?

We visit his office, which has posters about children’s rights on the wall, and he shows us the selection of gifts that visitors have brought him: a small travel chess set and a selection of playing cards. Our gifts of pens, papers and baseball hats are added to it. I feel rather embarrassed when I think how much choice children have at home.

An image of ‘Toys R Us’ flashes into my mind and I think about how many people fill up their trolleys with hundreds of pounds worth of plastic for their children on a regular basis.

We drove across the plain, stopping briefly to see a water pump we funded. Next we visited SIMAM (community based management of acute malnutrition project) in the village of Hamusit. As we approached, I saw a low concrete building and a cluster of women by its side. As we got closer we could see that each woman was cradling a baby.

The women had brought the seriously underweight children for supplementary feeding. The babies and small children were lying listlessly in their mother’s arms. One child was chatting, but otherwise it was eerily quiet. I knelt down and looked at a baby – he had a wizened face like an old man.

One or two babies were taking Plumpy’Nut – the supplement that Save the Children gives to seriously underweight babies that the mother can administer herself. We learned that the mothers will walk for up to an hour and a half in order to receive treatment.

We also learned that babies either show improvement within approximately two months, or show no improvement and are sent to a hospital. Some of these children are seriously ill; even my unpractised eye can see that one is in a very dire situation.

Our staff emphasised how acute the situation is; the number of children with severe malnutrition turning  up at the centre is almost twice the amount that the staff anticipated.

Mulugeta Azala, the government Health Extension Worker Supervisor, made a small speech to me. He thanked Save the Children for our work and asked that we consider supporting this project for a longer period.

“What we appreciate about Save the Children is that they work with us and show us how to improve things,” he says. “Save the Children has helped to fund this project supporting malnourished children – without it many children will have died. If we don’t support it, more will die.”

We are very quiet. Douglas puts into words what we are all thinking. He says:  “How could we ever complain about the privileges we have?”

We talk about how staff in Farringdon can feel detached from the work — and speculate on how this might impact on people working more efficiently. How can time be wasted in unnecessary meetings when people need immediate action? We all felt spurred into action to push out what I call the ‘treacle’ of day to day work.

This has been a wonderful visit. It truly shows the breadth of work that we are engaged in: irrigation, nutrition, hygiene and health. In the car we discuss how we don’t promote the diversity of our work enough in the UK, and how powerful a message it is. We must do more on this.