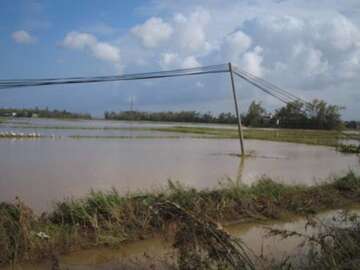 Flying into Da Nang it’s cloudy. But then, briefly a break in the clouds and a glimpse of the situation on the ground. Water. Everywhere. All the fields completely flooded. Broken by traces of roads.

I’ve been here before. A bustling port city which thrives on trade, agriculture and tourism. All on pause for the moment but it can be amazing how resilient people can be. Let’s see.

I’m with a rapid assessment and response team. We also have teams going to five other provinces nearby. We’ll get some initial relief supplies going to the worst affected areas and really try to understand the consequences of the storm. 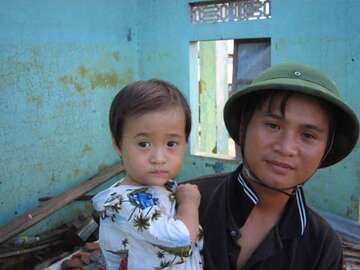 We land and it’s raining heavily. Leaving the airport we see that this new rain is flooding the streets but clearly people are starting to try to get on with their lives. As usual in Vietnam, mopeds everywhere. Quite tricky to get around with over a foot of water on the roads. There debris on the streets. Lots of damage – advertising boards, uprooted trees, minor debris. However, we’re in the city. The buildings are tougher in the winds and the water will drain away quicker.

We get some help from a friendly hotel owner who is letting us establish a temporary base in his building. I ask him what it was like when the storm came through two days ago: “We’re used to it here – we get a typhoon every year. But we can’t remember the last time a typhoon brought so much rain. Most of the city is ok but they’re really struggling inland. People are poorer there and with crops and homes destroyed they will find it hard to recover”

News comes in on supplies. We should have 400 household kits later today, more to folllow. That’s a water container, two blankets, a large mosquito net, a kettle, two cooking pots, a bucket and a few other utensils for some of the households that lost all their possession. We’ll prioritise pregnant mothers, those with young children and families that have lost their breadwinner.

We’ll need to supplement this with ways to help families whose houses are wrecked. With so much water lying around we’re also worried about sanitation and hygiene. It needs close watching – children are the first to suffer if drinking water is dirty, if they don’t get enough of the right food, or when diseases start to spread. It’s a vicious circle, especially for newborn children.

I’m relieved. And happy to see him. He’s a doctor and I know we’ll need his skills and knowledge of the area.

A chat with Huy, a colleague back in Hanoi – “that second typhoon’s approaching Luzon in the Phillippines – another strong one – fifty-fifty chance of it heading your way in a few days”.

Nick Finney is leading our emergency response in Vietnam