Donate your Sadaqah this Holy Month

there is hope this Ramadan

We accept all major credit cards and PayPal

This Ramadan you can give hope to children growing up in some of the toughest places. Your donation will support Covid-19 preparedness and responses in Syria, Yemen, Gaza, Bangladesh, and Somalia, and other countries around the world.

Whatever you can give, your generosity this Holy Month will help children get the food, medicine, and support they need to recover from the impacts of Covid-19 - so they can look forward to a happier future.

See what your Sadaqah can do

Watch our videos in Arabic (left) or English (right). 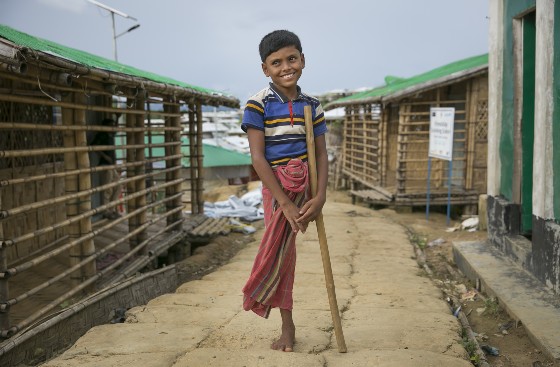 Aziz*, 8, and his family arrived in Cox’s Bazar in August 2017, after fleeing violence in Myanmar. During the violence, Aziz was separated from his family and was shot twice in his leg. His leg had become infected and had to be amputated.

When he and his family arrived from Myanmar they lived on a steep hill which was very slippery during rains, which meant that Aziz, with just one leg, was trapped at home. Save the Children was able to help his family to relocate to a flatter part of another camp, which has transformed his daily life.

He attends one of Save the Children's Child Friendly Spaces and now has friends who are his own age, and to play hide and seek. Save the Children was able to provide him with a prosthetic leg and crutch, but he has now outgrown them and needs new ones.

push for peace in Yemen

Your support can help give the children of Yemen a future to look forward to.
Sign our petition