The UK Government’s decision to reduce aid spending to 0.5% of gross national income (GNI) came with a promise to return back to 0.7% when the ‘fiscal situation allows’. This vague and subjective condition has led to a lot of debate about when this might happen. Although we can’t second guess when the Treasury believe this will be, the consensus is they wouldn’t want to move back until at least 2023.

While the Treasury may want to continue spending less to help the world’s poorest next year, maintaining aid spending at 0.5% of GNI will be extremely problematic for two reasons. The first is many of the aid cuts made by the Foreign, Commonwealth and Development Office (FCDO) aren’t actually cuts, but deferred payments into 2022 to meet promised commitments. Key examples of this are funding to UNFPA, the CDC Group and UNITDAD, which alone total over £300mn of aid deferred from this financial year to the next.

Secondly, in the next financial year the Government is legally bound, through statutory instruments, to provide significant funding to multilateral development banks (MDBs), most notably to the World Bank’s International Development Association (IDA). This is because MDBs require donors to legally back commitments to protect their own lending operations. The UK’s funding to IDA was ‘managed’ in 2021 by frontloading it into 2020, made possible by making significant aid cuts. Whilst this trick worked once, the FCDO can’t do it again.

Combining these two factors, along with ongoing bilateral projects, means that FCDO’s budget has already been fully allocated if 0.5% was maintained in the 2022 financial year (Figure 1). In addition, its allocated budget will likely increase in the coming months as new commitments are made on COVID vaccines (non-dose sharing like continued support to COVAX) as well as climate finance. 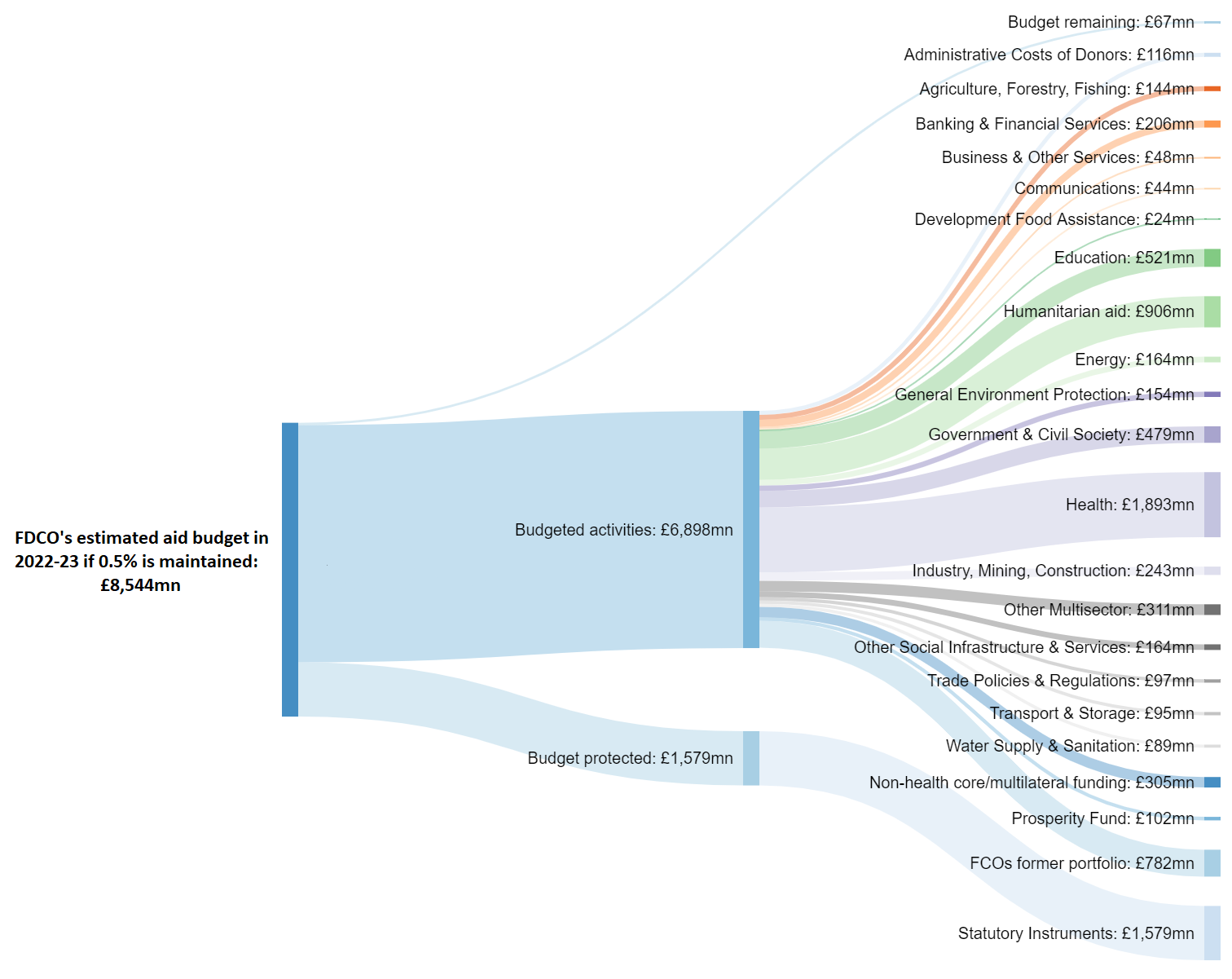 Having a situation where budgeted aid activities are greater than FCDOs total aid budget is clearly not viable. Therefore,  the UK government will need to look at solutions in three possible ways.

i) Reduce 2022 aid budgets from other departments – Although the FCDO is by far the largest provider of UK aid, they could look to increase its share further. For example, there will be a reduction in aid linked to the EU budget in 2022, but this would only provide limited leeway. Reducing aid spending by other departments could be an option, but with the department of Health and the Home Office already asked to make cuts this year, the extent to which further cuts could be made in 2022 is likely limited. In addition, there could also be areas the Treasury would like to see increased aid to, such as to the IMF’s poverty relief growth trust (PRGT), using their new Special Drawing Right allocation.

ii) Have a further round of ‘aid prioritisation’ (e.g. cuts) – Whilst this option is technically feasible, it would be the third time in three years that FCDO have had to do this. This would likely result in further cuts and disruption to bilateral projects in sectors critical to children that have already seen funding slashed. A clear area of focus would likely be further reductions to humanitarian assistance, which has already been cut by over 40% since 2019 and led to significant funding cuts to some of the world’s worst humanitarian crises in Yemen and Syria.

iii)  Return to 0.7% - Whilst a combination of option (i) and (ii) could feasibly work in maintaining 0.5%, it would ultimately break promises to, and come at the expense of, the world’s poorest people living in crisis situations. Therefore, the only viable solution to not have this happen is to return to 0.7% in 2022. The impact on the UK’s public finances would be marginal and come at a time when spending linked to the domestic covid response will likely be significantly reduced and tax revenues will have increased from a return to normal economic activity.

Announcing a return to 0.7% in 2022 makes perfect sense right now

Beyond solving the challenges outlined above in managing an aid budget linked to 0.5% of GNI, there are a multitude of wins the Government could gain by announcing an intention to return to 0.7% in 2022, including;

i) Stopping the dissenting voices in its own party critical of the cut to UK aid,
ii) Ending accusations that they are acting unlawfully in changing the target for aid spending,
iii) Persuading other governments to increase investments in key interest areas this year such as the Global Partnership for Education (GPE), Nutrition for Growth (N4G), IDA’s 20th Replenishment and COP26.
iv) Sending positive signals to a domestic audience  – amongst whom support for aid is growing - that the recovery is underway, and its vision for a ‘Global Britain’ is alive and well.

The upcoming Parliamentary summer recess presents an opportunity for key decision makers in Government to reflect on the challenges of maintaining 0.5% in 2022 and the distinct advantages of moving back to 0.7%, both for them and the world’s poorest people. As MPs return to their constituencies, it’s likely that they’ll hear from concerned residents about the role the UK plays on the world stage. In the meantime, the broken manifesto promise hangs over any new commitments.