Last week the Emergency Health Unit (EHU) received the very sad news that our staff member, Patricio Walmsley, who deployed with us numerous times, was killed in a plane accident in his home country Argentina. He was working for the Argentinean flying ambulance service at the time.

His friend and colleague Christopher Forbes has written the following to pay tribute to Patricio’s huge contribution to Save the Children’s humanitarian work:

I am saddened to share the news that my friend and our colleague Patricio Francisco Walmsley died in a tragic accident whilst working in the flying ambulance service in his home, Argentina, on the 5th May 2020. He was a member of the Emergency Health Unit roster and deployed with us to many responses in the past three years. He continued to be an active extended member of our team and EHU family. 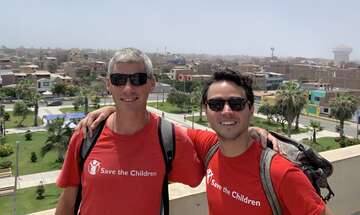 Patricio was a humanitarian through and through. He trained as a nurse in Argentina and ever since graduating he truly lived by humanitarian values. People who worked with Patricio knew him for his compassion and sense of duty towards the most vulnerable including children. His passionate approach to his work and his life touched many colleagues at Save the Children, including me. He was intensely exuberant as well, which, coupled with his fluency in Swahili made him a popular colleague in DRC.

His EHU deployments are many: in DRC he worked in Kasai Oriental supervising the mobile clinic activities for population affected by armed conflict. He also deployed to Cox’s Bazar for the Rohingya Refugee response, a second DRC deployment and to Mozambique for the Cylone Idai and Kenneth response in a similar capacity. I worked with him in Lima, Peru two months ago on a health assessment of the Venezuelan migrants and refugees.

We shared many laughs and stressful nights over a tight deadline assessment in a country that was very familiar to both of us, him coming from Argentina and myself coming from Mexico. Like our home countries, Peru faces extreme wealth polarisation. It was his first time deploying in his own continent; he was grateful and humbled by the experience. Within the assessment, we interviewed leaders in the Peruvian Migration Authority working to provide free HIV services to Venezuelan migrants and co-facilitated a focus group with HIV positive men who shared their plight and their hopes. They were grateful for us to give them a space to share their experiences. This touched Patricio greatly.

Human suffering and systemic unfairness provoked him to action. He was an advocate in his home country for better wealth distribution. Patricio embodies Save the Children values and I believe he will remain an example to those who have worked with him, and I hope now you.

As we grieve Patricio’s death and honour his life, I am reminded to never take things for granted. Tell a colleague or friend that you value them and that they make a difference in your life, you never know when you will next be able to tell them so. Patricio would have liked that.