The United Nations Statistical Commission has just approved a new indicator to measure whether public money is being spent on the world’s poorest people who need it most. This might not sound like a classic, news-grabbing headline. But the impact that it could have on global efforts to eradicate poverty could be profound.

All children have the right to good health, quality education and a life free of poverty. SDG goals around universal health coverage, 12 years of free and quality education and the eradication of extreme poverty are the expression of governments’ desire to fulfil children’s rights in those areas. Public spending is essential to deliver this vision and some progress has been made to increase allocations to those sectors.

However, much less is known about how this spending benefits the poorest and most vulnerable groups in societies –  those who need it the most. Methodologies to measure this have existed for quite some time and relevant analyses do pop up in reports here and there. But the new indicator, proposed by Save the Children and UNICEF for the SDG framework, will allow for a more comprehensive, comparable and consistent way of measuring this across the world. Until now, this was a gaping hole in the SDG indicator framework. Moving forward, this will provide a foundation for better policy-making and stronger accountability.

Before we get into the details, let me rewind slightly. Why do we care about the effect of social spending on vulnerable groups in the first place? The ground-breaking pledge to Leave No One Behind within the SDGs promises to deliver progress for all groups of society and to reach those furthest behind first. This means for instance that those children who have the highest risks of dying before their fifth birthday or experiencing severe forms of malnutrition are in particular need of high-quality healthcare. Research we published last year shows that this is in most instances not the case. What is needed is to shift the focus of service provision to those furthest behind, which requires realigning public finance accordingly.

Measuring how much public spending on social services such as health, education and social protection benefits the most vulnerable groups in society would contribute in two ways:

This thinking is not new and such an indicator was already considered for the original SDG indicator framework. However, the original indicator proposed was complex and unclear, and nobody developed a methodology to actually measure it. This is where we stepped in and – together with UNICEF – proposed an updated methodology in the recent review of the indicator framework. Last week, the UN Statistical Commission (the highest body of the global statistical system) approved the proposal. The Commitment to Equity Institute assisted through providing some pilot data, which illustrates the potential insights this new indicator will provide.

The graph below shows this data for selected countries, displaying the proportion of spending across the three sectors which benefits people living in poverty. The small horizontal lines above the bars illustrate the poverty headcount in each country, i.e. the proportion of the population which is considered poor (based on national definitions of poverty). 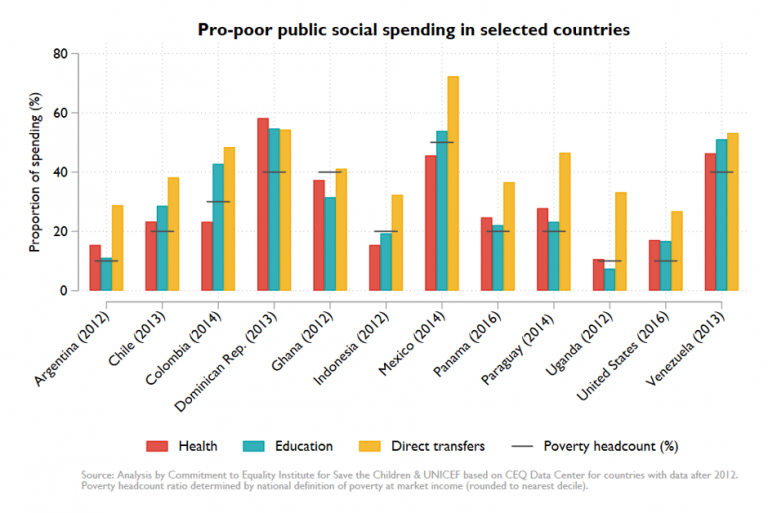 Comparing poverty headcounts and spending proportions shows that in most countries in the sample, spending has been pro-poor, which means that the population in poverty has a disproportionately larger share of spending. Take the example of the Dominican Republic: 40% of the population is poor, but those 40% benefit from 58% of public health spending, 55% of public education spending and 54% of social assistance. This is pro-poor public spending. However, in countries such as Colombia, Ghana, Indonesia and Mexico, the proportion of public spending on health for the poor is below the poverty headcount, meaning that the most vulnerable groups of society have a disproportionally small claim on public resources in this sector. For instance, the 20% of the population living below the poverty line in Indonesia receive only 15% of public health expenditures and 19% of spending towards education. This is reflected in crucial child outcomes, as GRID, our Child Inequality Tracker, shows: children in the poorest 20% are twice as likely to die before their fifth birthday than those born into the richest 20%. At the same time, only 83% of the poorest do complete primary school, compared with almost 100% of their most advantaged peers.

Last week we held an event together with UNICEF and the World Bank to introduce the indicator to a wider audience. The discussion showed the potential this kind of analysis has to shape public finance analysis and decision making. There is certainly more work needed to further develop the methodology and allow for analysis for specific vulnerable groups, especially children (the current definition of ‘poor’ covers people in monetary poverty based on national poverty lines). We look forward to continuing to work with partners to build understanding of who is really benefiting from public finance, strengthening accountability and taking some of the guess-work out of delivering the SDG targets for the world’s poorest and most marginalised children.