Lloyds Banking Group: a perfect start to our charity partnership 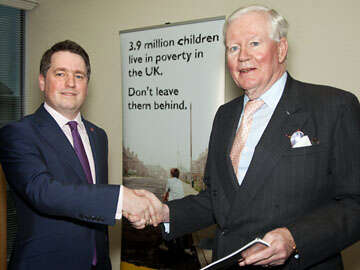 Our Charity of the Year partnership with Lloyds Banking Group got off to the perfect start yesterday afternoon when senior figures from both organisations urged staff to raise as much money as possible for our work to end UK child poverty.

Speaking at the partnership’s official launch event in central London, Lloyds Banking Group Chairman Sir Winfried Bischoff and Save the Children Chief Executive, Justin Forsyth, encouraged employees to embrace a range of fundraising activities designed to help us reach our £1m target by the end of the year.

“I’m pleased that colleagues across the Group will get behind this very important cause throughout 2011,” Sir Winfried said. “Good luck with your fundraising, and let’s make this another highly successful Charity of the Year campaign.”

Save the Children was chosen as Lloyds Banking Group’s Charity of the Year following a staff vote in which more than 9,000 of the company’s employees voted for us ahead of two other contenders.

It means staff working at Group companies, including Lloyds TSB, Halifax, Bank of Scotland and Cheltenham and Gloucester (C&G), will have the chance to collectively raise money for us throughout 2011.

“Everyone at Save the Children is thrilled to be working with Lloyds Banking Group,” Save the Children’s Chief Executive, Justin Forsyth, told those present. “The money you raise through this partnership will help us transform the lives of thousands of children living in poverty across the UK and give each and every one of them the chance to reach their full potential.”

Money raised through the partnership will be used to work with 2,400 families and 4,000 children by funding 52 our Families and Schools Together (FAST) Programmes at 26 key locations across the UK.

FAST is a groundbreaking programme that strengthens parents’ relationships with their children, stimulates learning outside school and encourages parents to become more active in their children’s education.

Watch this space for more on Lloyds Banking Group employees’ fundraising efforts as the partnership progresses throughout the year.