The world is severely off track in meeting the Sustainable Development Goals (SDGs), a key component of Agenda 2030, our collective blueprint for building a brighter future for all. Recognising this, during the last UN General Assembly in September 2019, world leaders vowed to devote the coming decade to driving transformative change for people and the planet. Last week, in Oslo, the first Global Workshop on Voluntary National Reviews (VNRs) – an important mechanism to report on progress towards the Agenda 2030 – provided experts from around 50 countries with the opportunity to brainstorm ways to produce reports that accurately reflect national challenges and progress in implementing the SDGs.

VNRs are a follow-up and review mechanism that underpins Agenda 2030. The next VNRs are due to be presented in July 2020 at the High-Level Political Forum (HLPF), an annual space dedicated to governments, UN bodies, civil society, academia and grassroots organisations to review global progress on the SDGs and highlight critical gaps in the global response. The theme of next year’s HLPF, Accelerated Action and Transformative Pathways: Realizing the decade of action and delivery for sustainable development, underscores that we must drastically change our current business-as-usual approach.

The HLPF and VNRs represent a significant shift in accountability since the era of the Millennium Development Goals. This approach acknowledges that governments are accountable to their citizens on promises made about the international development agenda. While the voluntary nature of VNRs has led to debate about their effectiveness, we’re actually seeing increasing interest from governments in reporting on the SDGs. This manifests in both the number of countries reporting each year and the quality of their reports.

It’s great to see growing appreciation for SDG monitoring and accountability at the global, regional and national levels. And given tensions in the multilateral system and developments globally that are threatening to roll-back some of the fundamental human rights we’ve collectively fought so hard for, the enthusiasm countries are showing toward the VNRs is even more encouraging.

SDGs reporting is also good news for children’s rights. As over 90% of the SDG indicators can be linked to existing human rights treaties and instruments such as the United Nations Convention on the Rights of the Child, the SDGs provide an overarching framework to drive the realisation of children’s rights to survive, develop and be protected – Save the Children’s three priorities. At the same time, the SDGs champion children’s right to be heard through participatory and accountable development processes.

At the workshop in Oslo, Save the Children brought three main messages to national governments as they begin collecting data and drafting their VNRs:

At the heart of Agenda 2030 is the pledge to Leave No One Behind. This commits countries to put those furthest behind first and ensure that all targets are met for all segments of society. It is rooted in the idea of justice, non-discrimination and the interconnectedness and indivisibility of human rights.

Yet, our research reveals that progress towards the SDGs at the national level has often not been even or inclusive. Wide disparities exist between children in rural and urban areas, as well as between the poorest and the richest children, with some subgroups being disproportionately affected by deprivation. Moreover, there are marked regional inequalities within countries: for example, in some countries, the richest children in the most disadvantaged regions are more likely to die than the poorest children in more advantaged regions.

Across a wide range of critical indicators, the most deprived and marginalised children lag the furthest behind. For example, our research shows that, despite progress in reducing child mortality, on current trends it is estimated that 64 million children under five will lose their lives between now and 2030 . More worryingly, the risk is not evenly spread: more than half of those deaths will be concentrated in only ten countries and over half will be newborns. Children from the poorest 20% of households account for 34% of all child deaths and 31% of all cases of stunting.

The three graphs below illustrate the gaps between different groups of children – according to wealth, gender, and geographical location.

In the Gambia, DRC and Malawi, the national average rate of mortality rate for children under five is decreasing. However, disaggregated data in Figure 1 shows that rural children fare much worse than their urban counterparts. Wealth plays a crucial role too: the poorest children have a much higher the risk of dying before age five than the richest ones.

At the national level in all three countries, trends show that progress in school completion is happening. However, an equity lens reveals that progress is benefiting some children more than others. Rural children lag significantly behind their urban counterparts. So do the poorest children, who are much less likely to compete primary school than the richest ones. Finally, gender matters: with the exception of Malawi, girls fare worse than boys.

In the Gambia, DRC amd Malawi, rates of child marriage (SDG indicator 5.3.1) remain high. But some girls are more at risk of this harmful practice than others: the prevalence of child marriage spikes in rural areas and plummets in urban ones.  The poorer a girl, the higher her risk of being a victim of child marriage.

As the graphs above illustrate, the failure to narrow the gap between children who are furthest behind and children in the rest of society is acting as a brake on overall progress and threatens to undermine the entire Agenda 2030.

In short, the only way to realise the pledge to Leave No One Behind is to reduce inequalities within and between countries.

To do this, governments need to move away from potentially misleading national averages and understand the importance of reporting on convergence as an important part of their VNRs. Survey and other disaggregated data should be used to report on inequality and convergence trends regularly and transparently. Save the Children’s free online inequality tracker – GRID – is an important resource that can be used to track and monitor how disparities between socioeconomic groups narrow or widen over time in over 100 low- and middle-income countries.

Tracking trends in inequality creates an entry point for governments’ policy and financing decisions to begin prioritising the most deprived and marginalised children. This can drive convergence in outcomes between the most marginalised children and their peers, and accelerate overall progress on the SDGs. In practice, that means higher levels of per capita spending for those children and districts furthest away from the SDG targets.

Spending should be aimed at narrowing disparities based on wealth, gender, ethnicity and other markers of disadvantage. VNRs present an opportunity not only to do a stock-take on SDG progress to date, but to reflect on challenges and lessons learned. For example, research on financing access to healthcare and nutrition has shown that prioritising the most deprived and marginalised parts of the population is nearly twice as cost-effective in saving lives as investments in less deprived and marginalised parts of the population.

Figure 4. Convergence in the DRC: groups of children have made progress towards primary school completion, with those furthest behind making the greatest strides 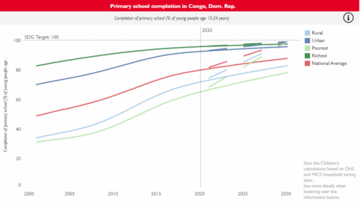 Figure 5. The widening gap in child marriage in Malawi: the prevalence of child marriage overall has slightly decreased, but the gap between girls from the poorest and wealthiest families has grown 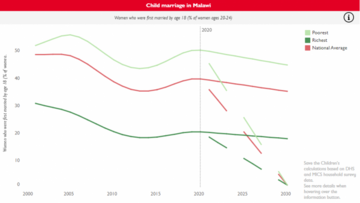 Save the Children believes that children are powerful agents of change. All over the world, children and young people are increasingly claiming their right to be included in processes and debates affecting their development. Four years into the SDGs, we have seen that VNRs have tended to be strongest when consultation and reporting processes have been inclusive and participatory.

Children bring a unique body of knowledge and expertise based on their lived experience. Their views have the potential to be an immensely valuable resource that governments can harness on the issues and priorities that matter to them. That’s why national governments need to include children in VNR processes – because ultimately, the future Agenda 2030 is seeking to create belongs to children.