A forum for peace 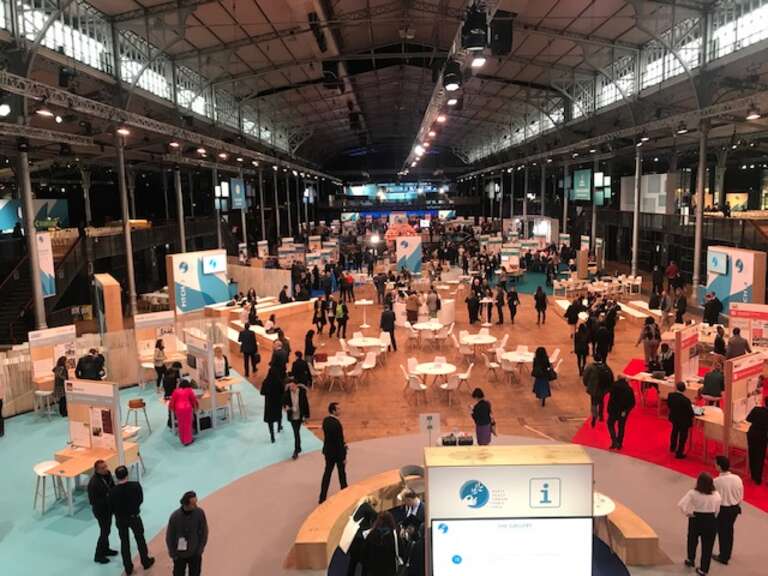 I attended the second ever Paris Peace Forum this week representing Save the Children to promote our ‘Stop the War on Children’ campaign. President Macron deserves credit for his efforts to set up a new conference from scratch that brings together global voices from across politics, civil society and business.

The agenda was vast with multiple agora talks competing for attention with dozens of stalls divided by development, inclusive economy, climate, education, peace and security.

After making your way through the obligatory metal detectors, sniffer dogs and heavily armed police you find yourself alongside 6,000 other participants in a cavernous conference hall that feels like a distinctly French version of the UN General Assembly.

The first sessions of the first day were dominated by world leaders. President Macron was joined by the President of the DRC, the new EU Commissioner and the Chinese Vice-President. All spoke a similar message of praise to multilateralism as the key to maintaining a peaceful global order.

Such a defence felt like an obvious counterpoint to growing nationalist agendas across the world and in particular President Trump’s ‘America First’ stance. Indeed, the Americans were largely conspicuous by their absence as world leaders and their entourages crisscrossed from event to event.

While few sessions looked specifically at the issue of children and conflict, many speakers made reference to the challenge of catering for their country’s large youth population. Macron’s hosting of the event reflects a growing influence of France in global affairs.

Whilst the UK’s political bandwidth remains gummed up by Brexit, President Macron urged attendees not to surrender to being too ‘lazy, cowardly or blind’ to the global challenges of the present day.

Whilst events informed and breakout spaces were quickly filled with intense networking, there was a focus on practical solutions around 700 project submissions from 115 countries looking to be ‘scaled up’ with the support of the forum.

Meanwhile ‘innovation spaces’ hosted peace and security roleplaying and ‘pitches space’ allowed people to present to a range of agendas all supported by an army of translators operating on over 30 headset channels.

There was not much in the way of headlines; the new European Commission President Ursula von der Leyen pledged that the EU will spend 30% more on external action, while Russian Foreign Minister Sergei Lavrov launched a blistering attack on what he described as the West’s selective interpretation of the international order.

A packed event on security challenges in the Sahel was headlined by the Presidents of Chad, Niger and Mali – all who bemoaned a lack of fiscal support to their counterterrorism efforts.

Most pertinent for our ‘Stop the War on Children’ campaign’s pillar on upholding laws and norms was the event that marked the 70th anniversary of the Geneva Conventions.

Peter Maurer, the President of the ICRC, pushed for the rules of war to be ‘adapted to different conflicts’ via ‘a more global, holistic, differentiated vision’. He outlined the very modern challenge of complexity in conflict, especially around non-state armed groups; the ICRC is currently engaged with over 420 of these groups, two-thirds more than their state interlocutors.

The French Ministry of Foreign Affairs has been supporting vital Save the Children programming in Syria and the Peace Forum was another reminder of Macron’s ODA commitment. We are looking to deepen our partnerships and advocacy in close collaboration with Save the Children International and members in what is an increasingly influential country. Colleagues in the Sahel and MENA region are actively engaging with French officials in country.

Whilst at the Forum we caught up with colleagues from Crisis Action France – who are focused on Yemen, Syria and South Sudan – as well as colleagues from Humanity and Inclusion, who as part of the ‘International Network on Explosive Weapons’ (INEW) are working with us ahead of a major political declaration around issue that is causing terrible harm to children in modern conflict.