Three reasons why justice for Rohingya children is so important

The atrocities suffered by children in Myanmar last year are a scar on the conscience of the world. Rohingya children have faced a ruthless campaign of military violence that has been systematic, targeted and deliberate. Over 700,000 Rohingya refugees – more than half of them children – fled for their lives to neighbouring Bangladesh, as villages were razed to the ground. Children were raped, murdered and burned alive.

But those responsible for these crimes against children have got off scot-free. We can change that.

The UK government has the power on the global stage to bring the perpetrators of these horrific crimes to justice through the International Criminal Court. Demand the Foreign Secretary uses this power now.

15-year-old Halima is one of many Rohingya children who fled in terror from military violence in Myanmar. This is what Halima told us, when asked what she wanted to share with the world.

Will you sign our petition demanding the Foreign Secretary uses the UK’s power at the United Nations to get justice for Halima?

Here are just three reasons why international justice for Rohingya children is so important:

1. We can prevent further violence against Rohingya children and other children in Myanmar

2. We must ensure “Never Again” means exactly that

How many times has the world said “Never Again”? I never want to have to say that again. The perpetrators of these crimes must be held to account. We need to send a powerful message to the world that atrocities like this against children will not be tolerated. “Never Again” must mean exactly that.

3. We can give Rohingya children a promise of a better future

When we speak to Rohingya children in Bangladesh, many long to return home when it’s safe to do so. Right now, that’s not possible, with those who committed crimes against Rohingya children, still in power. With little chance of going back to Myanmar, the Rohingya crisis is likely to become a protracted crisis which is not good for anyone. We can change the future of Rohingya children in the largest refugee camp in the world, with their lives on hold.

Accountability is the first step in a future where Rohingya children can return home and have the best chance to thrive in life. 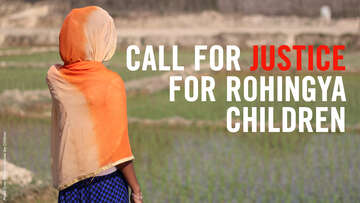 When atrocities like this happen, standing on the side lines is not an option. Unless people like us demand justice, children in Myanmar will continue to be at risk from such horrific violence. Add your name and demand justice for Rohingya children.