They came, they saw, they conquered: Global Youth Leaders for Nutrition

The Global Youth Leaders for Nutrition programme, round 2, took place in Rome last week. Four young people boarded their first-ever international flights and headed for the ‘Leave No One Behind – Making the Case for Adolescent Girls’ conference. The event, hosted by the International Fund for Agricultural Development (IFAD), the Canadian Government and Save the Children Italy, was unlike any development conference I had attended before. For one simple reason: the extraordinary youth leaders.

Our job was to ensure the four young leaders we’ve been supporting had their voices heard from start to finish. We began with two-days’ training on advocacy and communications, which Callum Northcote from RESULTS UK and I led.

It’s not often young people’s voices are heard in corridors of power – but these youth leaders clearly left their mark. Not only were they heard, they were listened to. The concluding statements from Juliane Friedrich (technical specialist on Nutrition at IFAD) reiterated that:

It’s a fantastic three-year programme – developed by the Scaling-Up Nutrition (SUN) Civil Society Network and partners Global Citizen, ACTION, and RESULTS UK – providing support to 13 young campaigners, aged 18–25, from countries with high rates of malnutrition, who have the skills, knowledge and opportunities to help accelerate progress to end malnutrition.

Since the programme kicked off, we’ve held a training workshop in Washington, DC, and the youth leaders have individually been invited to attend high-level panels. For example, 22-year-old Florence Siboma spoke at the United Nations General Assembly. 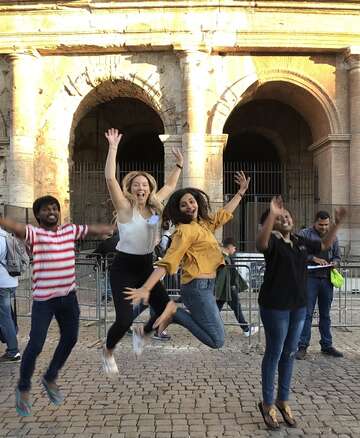 Young people are innovative, adaptive and savvy. Recent events, such as the 2018 student-led March for Our Lives campaign against gun violence in the USA and the 2010 youth-led protests of the Arab Spring, show how young people are leading change by standing up for what they believe in – as well as the challenges they face.

There has been extensive research into the importance of children’s  nutrition in the first 1,000 days. However, there has been a lack of research and investment in adolescent nutrition. According to recent studies, investing in adolescent nutrition (of girls, in particular) would have a highly beneficial impact on not just adolescents themselves, but on economies and societies. It can also have a huge impact on the inter-generational cycle of malnutrition, where malnutrition is passed from mother to child in pregnancy.

Those of you familiar with advocacy work will know we have a habit of attending a lot of events with the same formats that involve a lot of presentations. Second,  we often speak on behalf of children and adolescents.

Last week’s conference was nothing like that. Instead, we had Barsha from Nepal, Manata from Kyrgyz Republic, Niroj from Sri Lanka and Jane from Kenya each delivering speeches – including sharing their personal experiences and stories, an interactive play on child marriage in Nepal, and nutrition-focused panel discussions where they each offered recommendations to the wider delegation.  It was powerful and moving.

As a young person, I’m fortunate to work with an incredible group of young advocates and potential future leaders.  I urge you to look into ways your work can involve those it most affects. I promise you’ll feel inspired.

As Niroj Sudarshan said in his closing remarks, “Children are the future of the world and youth are the heart of the world!”