Today, Save the Children has published a new report, Still Left Behind, that assesses how countries are meeting the SDG pledge to Leave No One Behind. In the report we call for better monitoring and review of progress that the world’s most deprived and marginalised children are making towards SDG targets. You can read more about the report and our call for action here.

In this blog, we focus on the data that underpin the analysis presented in the report, and the interactive data tools that you can use to delve down deeper into inequality trends. We crunched data for the report from more than 400 household surveys from 68 countries to compute trends in seven key SDG child-focused indicators – under-five child mortality, stunting, child marriage, birth registration and primary school completion. Data are disaggregated by sex, socio-economic groups and urban/rural location. Our analysis provides us with a unique view of progress made by different groups over time, allowing us to examine whether groups left behind are catching up (or converging) with their more advantaged peers.

Using our analysis of trends and convergence rates, we also computed projections to assess whether SDG targets are likely to be met by 2030 for the furthest behind groups – a criterion of the Leave No One Behind pledge. You can read more about the methodology we used here.

To accompany the report, we’re making our data publicly available in a new online data visualization tool, based on GRID (Save the Children’s Group-based Inequality Database). The tool is easy to navigate and can be used to build bespoke graphs of national level inequality and convergence trends – useful for researchers, governments and civil society activists. You can also still find two other inequality tools on the site that we released previously, allowing users to compare inequalities across countries and analyse intersecting inequalities within countries.

The graph below displays data for Egypt using our new trends tool, presenting a clear visual representation of convergence. The light green line shows trends and projections for the under-five mortality rate of the poorest 20% from 1990 to 2030, and the dark green line for the richest 20%. The red line shows the national average trend and projection over the same period. Disaggregated data can also be displayed for other economic groups, girls and boys and rural/urban areas. 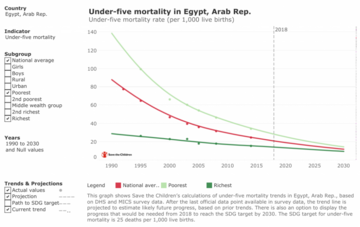 In comparison, the graph below shows the primary school completion rate for poor and rich children in Cameroon. It clearly shows the lack of progress that the poorest have made over the last 25 years, compared to the progress that was made for the richest and as a national average. This is a clear example of what it looks like to be left behind, demonstrating why clear, accessible and transparent monitoring of inequalities and convergence rates is so important. 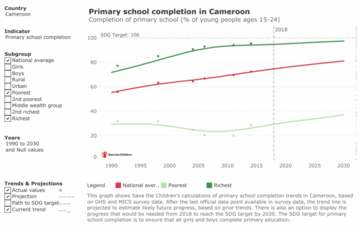 We hope that making these data available online via our GRID tool will help to make the sheer extent of global and national inequalities visible, and underscore the need for urgent action to accelerate progress for the world’s most deprived and marginalised children.