Protecting children from conflict in Sarajevo

I was last in Sarajevo almost 20 years ago. Back then, the Bosnian war was only recently ended and the scars – both physical and emotional – were still very raw.

Like millions of others, I had watched the horrendous siege of Sarajevo every night on the TV news. My complacent confidence in humanity’s intrinsic decency had been devastated by what I had seen, as well as by the massacre in Srebenica and the widespread use of rape as a weapon of war.

“I had felt powerless then, in the face of intolerable human suffering…”

Also, like millions of others, I hadn’t understood why the world’s great powers had taken so long to bring this horror show to an end. I had felt powerless then, in the face of intolerable human suffering, and it was partly to compensate for that powerlessness that I went to Sarajevo as a student, volunteering for a Bosnian NGO which was supporting reconciliation between the divided communities.

I’m still doing humanitarian work all these years later for the same reason.

I was working in Ilidža, at the western end of the steep valley in which Sarajevo nestles, and every time I took the tram up to the Old Town in the east I would pass the battered carcass of the infamous Holiday Inn.

The Holiday Inn was one of the most conspicuous buildings in the area – not least because it was bright yellow. It had stood right in the middle of “snipers’ alley”, one of the most dangerous areas of the city right by the front line, and it was where foreign correspondents had set up their makeshift bureaus and reported on the war going on all around them. Now, two decades later, I’m staying there.

“The trauma of the war is still physically visible.”

Re-branded as “Hotel Holiday”, the walls have been patched up, the water now runs, the food in the restaurant is no longer cooked on an open fire in the kitchen and the staff don’t live in fear for their families. It’s a pretty good place to stay and makes an excellent venue for a meeting – I’m here to discuss Save the Children’s programmes across the Middle East and Eastern Europe.

But it’s no longer the most prestigious place to stay in Sarajevo; in those intervening years the city has been transformed, with new malls, new tower blocks and much fancier hotels. This is a city moving on from the horrors of the past. 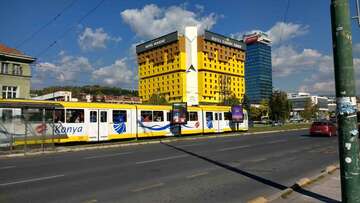 Or is it? The trauma of the war is still physically visible. Monuments commemorate the atrocities and graffiti urges passers-by to remember Srebenica. Sarajevo is run by a Bosniak-Croat government, but the border with Bosnian Serb-run Republika Srpska runs along the crest of the hills overlooking the city on its south side – the ethnic divide is right there.

“Our work is still facing the consequences of the conflict,” according to Andrea Zeravcic, the director of our North West Balkans team.

Ethnic tensions persist, services are weak, education is poor, poverty is endemic and vulnerable children face enduring discrimination. Save the Children’s work here is as important as ever – protecting minorities, supporting children with disabilities, strengthening education and innovating community-based services for the most marginalised children.

“…the costs of war are always so much greater and longer-lasting than anyone ever calculates at the onset.”

As we build our global campaign to protect children in conflict, I reflect on the lessons we should learn from Bosnia’s experience. One big thought is that the costs of war are always so much greater and longer-lasting than anyone ever calculates at the onset.

Those of us working to end the use of explosive weapons with wide-area effects in populated areas talk not only about the immediate harm that these weapons cause, but also the so-called “reverberating effects”.

These are the long-term consequences – in terms of disability, psychological damage, denial of services and economic ruin. In Bosnia’s case, they are reverberating even now.

Anything we can do in our advocacy to curtail the worst excesses of war and hasten the end of atrocious violence will make all the difference for the children living through today’s wars, whether in Syria, Yemen, South Sudan, Myanmar or anywhere else.

I also reflect on the question of accountability. If the perpetrators of violations in today’s wars knew that they’d spend the rest of their lives behind bars, perhaps they wouldn’t commit those crimes in the first place.

Although it has often felt slow, over-politicised and unsatisfactory, the International Criminal Tribunal for the former Yugoslavia now looks like a high point in legal accountability for war crimes – some of the bad guys from Bosnia’s war are in jail as a result of its work. It is hard to feel confident that the same will be said for some of the many perpetrators of grave violations of children’s rights in today’s wars.

The children of Bosnia’s war – the young people I met all those years ago – are now in their twenties, thirties and forties. Their children are growing up in a troubled but broadly peaceful country. This new generation must wonder at the madness that their grandparents wrought on each other, and perhaps also at the damage that was done to their parents by all that violence.

Find out more about how we’re protecting children around the world.