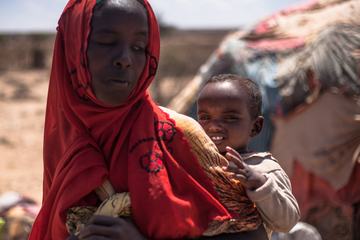 Photographer Mustafa Sayeed spent eight days with Save the Children UK in Somalia, meeting and capturing photographs of families whose lives have been torn apart by the brutal drought that has been crippling the region.

As the drought continues to worsen, more and more livestock — often a crucially important source of income for these families — fall ill and die.

Mustafa said, “These families are representative of the many Somali families across the Horn of Africa who are affected by this drought.

“Their livestock is their bank account – it is the currency that they depend on to live, and they have been watching their animals die in front of their eyes.”

Milgo and her four children have settled outside the town of Kiridh in search of greener pastures, but her livestock continue to struggle to survive in such unforgiving weather conditions.

“We had over one hundred livestock and we are now left with around twenty,” she says. “But they are still dying around here, right now we need everything.

“We need food, water and supplies for our house.

“My children are sick, they all have colds and they are constantly coughing. We’re only able to feed them one meal of boiled rice each day.

“I feel hopeless seeing my children in this desperate situation.”

Muumina sits with her daughter-in-law Hayat and her three grandsons.

The young boys’ mother is sick in hospital, so Muumina is taking care of them. The family is currently living on land surrounding the airport in the city of Burao, Somaliland.

“As pastoralists we used to go through life with livestock,” she says. “But most of them have died now because of the drought. We came here to find water for them.”

“We used to have one hundred and ten sheep. We moved with sixty of them after the drought started, and we lost fifteen on the journey here.

Earlier this morning we took some sheep out to look for pasture and two of them couldn’t walk anymore, so we had to leave them behind.

“People are sick, kids are dying because of diarrhea and malnutrition. There are people in this area who have buried children here.”

Saado and her four children travelled from the drought-stricken eastern region of Somaliland after hundreds of her livestock died.

They’ve now settled in the west of the country near the town of Dilla.

Here, another hundred of her livestock have died and they are now left with fifty sheep and goats – all too weak to give milk or be sold at the local market.

They are currently down to eating one meal of rice a day and her youngest daughter has been diagnosed with malnutrition by a recent health screening.

“Our biggest need now is food,” says Saado. “We need food so that my children can get stronger.”

Hodan, a mother of five, holds her two year old son Harun in her lap in the town of Kiridh, Somaliland.

Harun went blind following a bout of illness as an infant and he is now suffering from severe malnutrition.

The nearest hospital is several hours away, and Hodan, who has lost over half of her cattle to the drought, is struggling to feed her children or find treatment for Harun.

Grandmother Amina stands with her granddaughter, Ayan, in front of a makeshift shelter in an informal settlement outside the town of Yogoori, Somaliland.

They came here to live after losing their livestock to the drought.

“Our family had several hundred livestock but only twenty have survived the drought,” says Amina.

Indhodeeq with a granddaughter in her lap, flanked by her husband Noor, and her daughter, Hodan, who fell ill after recently giving birth.

After losing over a hundred of their animals to the drought, they too were forced to abandon their life as rural herders and seek refuge in the town of Kiridh, Somaliland.

They were given this small shed to live in by well-wishers in the town.

“Our immediate needs are food and water,” she says, “and a proper shelter for the children to live in.”

Indhodeeq also received a cash transfer from Save the Children which she used to buy food, milk, and medicine for the family.

Mariam, in green, sits with her daughter Sahra and Sahra’s two children in a makeshift settlement on the outskirts of the city of Burao.

“We came here with 120 livestock and now we only have 29 sheep and six goats,” she says.

Mariam’s grandson from another daughter recently died after suffering from diarrhoea and she has another grandson who is now in hospital in Burao.

All photos taken by Mustafa Sayeed.

Some names changed to protect identities.