Over 1,000 days of suffering for Yemen’s children

Today marks 1,000 days since the international escalation of the conflict in Yemen.

But even after over 1,000 days of suffering, destruction and death, still over half of Britons claim to know little or nothing about the conflict in Yemen.

In these past 1,000 days, there have been over 1,500 airstrikes which have led to the deaths of thousands of children from violence, hunger, and disease.

An estimated 1,900 hospitals and health facilities have been destroyed, there are nearly one million cases of cholera and 462,000 children are suffering from severe acute malnutrition.

Help spread the word about the world’s largest humanitarian disaster

Since March 26 2015, the situation in Yemen – already the poorest country in the Middle East even before the war – has deteriorated into a living nightmare where children starve to death every day and are shelled and bombed in their homes and schools.

Thousands have been left with life-changing injuries, like 13-year-old Noran* who is wheelchair-bound after the blast wave from an airstrike knocked her down and seriously damaged her spine.

Her father is the sole provider for her and her seven sisters but he hasn’t been paid his public-sector salary for nearly a year and a half. Life is now a daily struggle.

“I used to go to school on foot, my life was beautiful because I could walk and write. Now, I can’t walk to school. I can only go with the wheelchair. I used to be able to sit in a chair at my desk and write but now when I try to write, my hand hurts because of the injury in my back. I used to love writing, but now I can’t even hold a pen.” 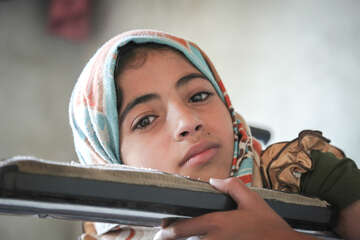 Despite the thousands of children like Noran in desperate need of help, still not enough people in the UK know about what’s happening in Yemen, or the UK Government’s role in the conflict.

Day of action for Yemen

That’s why today Save Children held an online day of action to draw attention to the conflict in Yemen, asking people to join us in telling their friends and contacts about the war, and calling for the UK Government to do more to help children in Yemen.

You can help us spread the word about the world’s largest humanitarian disaster, and call on our Government to act by signing and sharing our petition across your networks. People are power, and we need as many people as we can to take action to convince the Government that Yemen can’t wait.