Tackling diarrhoea in India: the power of community-driven development 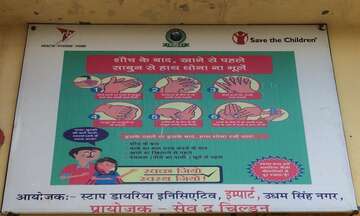 Our ambitious Stop Diarrhoea Initiative in India has just celebrated its first anniversary. In the field, challenges are fierce but progress is visible.

4am, Delhi train station, on a sweltering, humid monsoon day.

Waking up at an ungodly hour to catch a train to Uttarakhand in northern India seemed like an unnecessarily painful endeavour for a sleepyhead like me. That is, until I saw the hundreds of men, women, children and babies snoozing on the bare floor of this century-old building, tossing and turning in a desperate attempt to find a comfortable position to slumber for a few hours before hopping onto a jam-packed train.

After that, my two-hour kip in an air-conditioned hotel room didn’t seem so bad.

To be sure, I’ve travelled to far more impoverished places than the capital city of one of the world’s largest emerging economies. But there’s something about destitution in India that stops you dead in your tracks. As an acquaintance of mine sardonically put it to me recently, “India really does poverty brilliantly.”

It’s been one year since Save the Children’s “Stop Diarrhoea Initiative” (SDI) – a partnership with RB (formerly Reckitt Benckiser) ­– was launched in India. This ambitious programme seeks to eradicate diarrhoea-led mortality through a combination of seven interventions known to work in controlling the spread and burden of this lethal disease, and generate evidence on the effectiveness of this integrated approach in the process. See my last blog post.

While infant and child mortality rates in India have decreased dramatically over the past two decades, its sheer size makes it by far the largest global contributor of child deaths: one in five children dying every year is Indian. Diarrhoea alone is estimated to have killed 120,000 children in 2015 in India. This SDI anniversary provided an opportunity to take stock on the progress achieved, and meet the communities we’re working with to tackle what remains a major killer of infants throughout the Indian subcontinent.

Proving that anything works in vast India and hoping to influence policy change at the national level starts with recognising the enormous diversity and complexity of this country. The multiple fault lines that pervade Indian society, and which include its 29 states, the urban/rural divide, language, religion and the caste system among others, must be taken into account for any initiative to be able to demonstrate its ‘external validity’ – ie, the extent to which it can be deemed universally effective. For this reason, the SDI was rolled out in a selection of very different target areas: urban slums in Delhi and Kolkata, but also rural communities in Uttar Pradesh, India’s largest state by population, and Uttarakhand, one of its smallest. It’s the latter I chose to visit last month.

A small and mostly rural state of 10 million souls stretching along the Chinese and Nepalese borders, Uttarakhand had until recently eluded Save the Children’s old, deep and broad footprint in India. Located 150 miles north-east of the capital New Delhi, known for its tribal heartlands and spectacular landscapes, it features among the eight “socioeconomically backward states” and suffered terrible floods in 2013, prompting a major emergency response, which Save the Children took part in. However, the SDI is the first genuine development programme implemented by Save the Children in this state.

Our meetings start a 40-mile drive from the city of Rudrapur. The vast distances stretching between each of our target communities force us to select a cluster of gram panchayats – local authorities in rural India, consisting of villages or groups of hamlets – to focus our visit on. Their names include Sitarganj, Birendra Nagar, Baruabag, or Pipaliya. Herein lies one of the first challenges with implementing SDI in rural, sparsely populated zones: community health workers and volunteers, of which there are a number of different cadres in India and who play a key role in diarrhoea control, usually cover several gram panchayats and end up having to travel prohibitively long distances to perform their basic preventive, curative and sensitisation duties.

Poor sanitation and open defecation feature among the key causes of diarrhoeal infections – and nowhere more so than in India. Several decades of programmes and policies designed to improve access to sanitation and promote hygienic and healthy behaviours haven’t yet cracked what remains a major obstacle to reducing child mortality. To take a textbook example of how new knowledge alone does not necessarily translate into changed practices and behaviours: there’s a wealth of evidence showing that social norms and personal preferences have played a powerful role in thwarting all efforts to end the practice of open defecation in India. Meanwhile, and rather puzzlingly, neighbouring Bangladesh has managed to virtually eradicate it.

The SDI harnesses the power of community-driven development to change social norms, promote healthy behaviours and advocate for people’s rights. Decades of failure in eradicating lethal, preventable diseases strongly suggest that old-fashioned, top-down ‘sensitisation’ programmes are not effective. Genuinely working with the grassroots to tackle multidimensional issues such as diarrhoea control has not only become imperative, but is also backed up by evidence from hundreds of successful examples around the world.

Luckily, India has plenty of existing, locally elected and therefore legitimate community structures designed to do just that, and establishing new ones where necessary can easily be done. In our case these include mother-to-mother support groups, set up by Save the Children with support from local leaders and village health committees. These groups bring together mothers of young children to discuss issues related to their children’s health and to support each other in times of need.

I was struck by the level of awareness displayed not only by the mothers, but also by the children I spoke to in the various places I visited over those two days. A lot of them were able to describe in significant detail the mechanisms through which “faecal matter spreads bacteria in the ground and the water table, which we end up washing our face with and drinking when we pump it from the ground; this is how children become sick and have diarrhoea.” I couldn’t put it better myself.

Recognising the potential of children as agents of change is another key feature of the SDI approach. Dozens of schools were supported to set up child health and hygiene committees. These include pupils selected from each grade, who meet on a weekly basis to learn about healthy practices through the medium of games and plays, and go on to play a leadership role in influencing their peers, and sometimes their families, to adopt hygienic behaviour.

Early results are encouraging. In the school I visited in the village of Birendra Nagar, the dozen or so members of the club displayed really sound knowledge of the 7-point plan, and were impressively articulate and confident in describing their role as ‘health champions’ among their peers. Peeping over at the school’s water point at lunchtime, where a crowd of boys and girls from all grades had gathered to wash their hands and plates, I witnessed older children literally ‘supervising’ younger ones through the handwashing process, talking them through the six steps for effective handwashing.

But let’s be honest: no sustainable solution for diarrhoea control can succeed without significantly improved access to clean water and sanitation for the poorest communities. While the SDI does fill some infrastructural gaps in partner communities by building school toilets and water taps, and community-managed toilets and individual pit latrines for some particularly marginalised households, the issue is largely systemic and requires political will and a combination of public and private investments.

A cadre of Save the Children trained paraprofessionals roam around water sources across the gram panchayat to conduct water quality tests using the kits and skills they were provided with. These are young community volunteers, remunerated by the government on the basis of a modest commission for each test carried out, and their assessments have already led local authorities to rehabilitate four unsafe water points in one district alone.

It’s an example of what needs to happen on a much larger scale: communities taking control of the development process, mobilising to influence duty-bearers and each other, and finding sustainable solutions to their problems.