Increasing transparency and mobilising resources for nutrition in Niger: leave no child behind

As part of our work to promote transparency and accountability in relation to Sustainable Development Goal 2 – to end hunger and improve food security and nutrition – Save the Children has been analysing government budgets in a number of countries. One of these is Niger.

Here we present some initial results of the analysis of the Ministry of Health (MOH) budget of the Government of Niger – with a specific focus on internal vs. external funding – in the context of a continued burden of child malnutrition and poor budgetary transparency.

In fragile and conflict-ridden states the majority of funding for health and nutrition generally originates from external sources. This represents a threat to the sustainability of services and to scaling up interventions.

In addition, and related to poor socio-economic performance, Niger ranks very poorly when it comes to citizen participation and budget transparency, which are key to ensuring greater effectiveness in financial planning and allocating funds to priority sectors, programmes and interventions. Data collected by the International Budget Partnership shows that Niger scores just 4 out of 100 for public participation and 17 out of 100 for transparency (second lowest in the West Africa region after Chad).

In order to gain a greater understanding of how the Government of Niger is investing in nutrition, Save the Children has recently undertaken an analysis of the Annual Action Plan (Plan d’Action Annuel) of the MOH. The results of this analysis show that between 2015 and 2016, the overall MOH budget decreased from 231.7 billion CFA to 131.2 billion CFA. This means that in 2016, the per capita spending is around USD 10.7 per annum, or just USD 0.9 per month. External funds (donor funding) constitute a considerable part of all funding for health.

The graph below (Figure 2) illustrates the most recent trends in funding sources of the MOH in Niger. As can be observed, in 2015 the share of state funding was 45.5% compared with 65.2% in 2016. While this is a positive trend, the total amount of state allowances for MOH actually decreased, from 105.4 billion CFA in 2015 to 85.5 billion CFA in 2016.This was accompanied by a very sharp drop in donor funding. Regarding specifically the allocations to the Nutrition Division (situated within the MOH), there has been a similar trend, although less sharp: both the state and non-state allocations have decreased, with a greater decline in non-state allocations. These alarming trends – in particular the very sharp decline in funding for health – highlight the dangers involved in dependency on external funding for eradicating malnutrition and ensuring the socio-economic progress of the country. 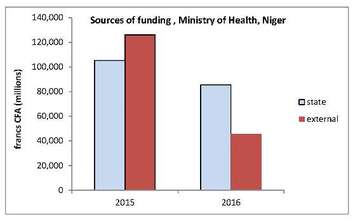 Finally, the analysis from Niger shows the complexity of examining countries’ budgets and sources of funding. While in percentage terms, state funding for health increased, the total amounts have actually seen a decline. Given the crisis of child malnutrition in Niger, the decrease in the overall health budget is deeply worrying. Our further analysis will look closer at this issue, as well as focusing on examining investments in other nutrition-related sectors, such as water and sanitation, women’s affairs, and agriculture.